A Literal Truckload of Chorizo and Empanadas 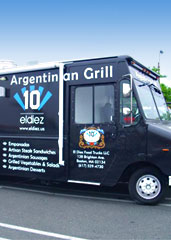 But not in a World Cup way. That would be unpatriotic.

We mean it in more of an empanadas-and-steak-sandwiches way.

Put on your meat-eating shoes, because here comes El Diez Argentinian Grill, a big black truck stuffed to the gills with chorizo sandwiches and other Argentine delights, hitting the streets Tuesday.

This is actually the first stateside offering from a small, Mexico City–based Argentine chain of the same name. They could have gone the easy route and opened another brick-and-mortar in Texas or something. But instead, they decided to make it a food truck and touch down in Boston. You can take it from here.

Imagine: some fine summer day when you require grilled meats and are nowhere near a grill. Or desire empanadas, but lack a machine that instantly makes them for you. Whatever the case, just find these guys.

They’re more than happy to grill nearly any meat you want (chicken, chorizo, pork, quarter-pound steaks) and place them in toasted baguettes with scratch-made chimichurri. And set you up with some spinach-and-béchamel-filled empanadas, if you still have room.