A Cocktail Mixer That Prevents Hangovers 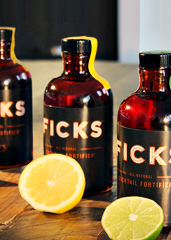 We’re lovers. You know that. But every now and again, something comes across our desks that just seems... suspicious. Because of the tremendous material upside to all our lives if these claims pan out, we at times put ourselves in harm’s way to investigate. Albeit skeptically.

THE CLAIM
That a newly minted cocktail mixer known as Ficks not only tastes good when combined with the likes of gin—but also prevents hangovers through a proprietary blend of vitamins. Or so says the clever packaging.

THE INVESTIGATION
First, the easy part: find some folks on our research team who wanted a drink.

Then... another easy part: make the drink. In this case, we went one part vodka, one part lemon Ficks (it’s also available in ginger and lime).

According to the label, this stuff contains milk thistle (it fortifies your liver), dandelion (it detoxifies) and electrolytes (they’re... well, they’re in Gatorade). But according to our investigators, all they could taste was citrus and vodka. So they had a second round to be sure. And a third in the name of science.

THE VERDICT
We’re happy to report that the next morning, everyone felt fine. Better than fine, actually. Guess it works.