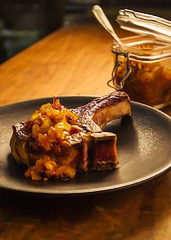 In the next few months, a bunch of new places to consume titanic cuts of meat are hitting town.

First up: American Cut. It’s opening tomorrow in Tribeca. It’s accepting reservations now. And here’s how it stacks up...

The vibe: High ceilings, brick walls, leather armchairs. Ideal for celebratory ribeyes or carnivorous dates.
Which makes it: A solid six on our patented Old-School-to-New-School Spectrum™. Not Peter Luger’s (a 10), but definitely not STK, either.
The pedigree: It’s from LDV Hospitality and Marc “Iron Chef” Forgione—perhaps you’ve been to the AC original.
Your meat guy: A humble neighborhood butcher by the name of Pat LaFrieda.
The biggest steak: Forgione’s signature 42-ounce, 28-day-dry-aged tomahawk ribeye for two—also available with a two-pound lobster swimming in chili sauce. (That’s 74 total ounces, if you’re counting.)
Sauces: Five, not including butters.
Toppings: Seven, including foie gras.
Wine options: Too many to count.
Vegetarian entrées: Irrelevant.
If there’s room for dessert: Get the pumpkin cheesecake, which comes with syrup-poached cranberries, cinnamon whipped cream and pepita brittle.

And possibly a bigger pair of pants.

A Personal Cabin You Can Put Anywhere

BedGym Lets You Workout From the Comfort of Your Bed