Three New Ways to Do AT&T Park This Season 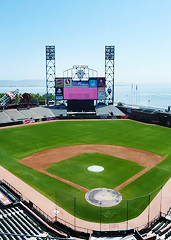 One might even call it the Giants’ home opener.

And hey, you should totally go. Eat hot dogs. Watch Sandoval do things. Sit in that brand-new section behind home plate and grab a Bloody Mary made using the same recipe that Lefty O’Doul used back in 1958.

Which reminds us... there’s some new stuff going on this season at AT&T Park, reopening Friday.

Below: three things you need to know before suiting up and taking to the stands.

There’s this old Bloody Mary at this new bar...
The bar: Lefty O’Doul’s near the O’Doul Gate. The Bloody: created 55 years ago by the local baseball legend himself. There’s also a new wine bar called Vintage 58. But, you know.

When you run out of peanuts and Cracker Jack...
Go to the Promenade Level. Then go to the Derby Grill. Then ask for their new Hamburger Sandwich. It’s 12 ounces of ground chuck on a toasted baguette. And in case you missed it... 12 ounces.

Try not to blow a hammy.