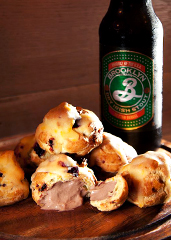 St. Patrick drove all the serpents from Ireland with a rod, a staff and a lot of furious gesticulating.

Then he wrote down his recipe for Irish soda bread beer-pudding cream puffs and celebrated his triumph with many, many drinks.

Somehow, that recipe was lost for hundreds of years. Until the other day, when it was discovered in an East Village pudding shop.

And thus you can now consume The Beer Cream Puff from Puddin’, a soda-bread-inspired pastry filled with beer-soaked pudding, available all this week.

Here’s what this thing is: glorious.

You can buy as many as you want, up until Sunday. Which means that your St. Patrick’s Day will, at long last, have the beer-pudding-based dessert it deserves. You just call up and order a dozen or 300 or whatever. That’s it.

Also, they’re more than willing to just give you the beer pudding.

Presumably as a dipping sauce.