An Inviting Restaurant with a Split Personality 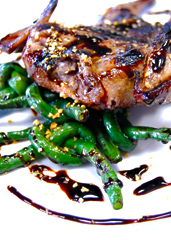 A: When it’s two restaurants.

Wrap your head around a confounding yet enticing new two-in-one spot called Fickle and The Sandwich Smith—yes, there’s Fickle, and then there’s the Sandwich Smith, but they both inhabit the same space—now open in Little Tokyo.

You might be a little confused, so let’s work through this together. Say it’s noon-ish and you’re hungry for a sandwich. (This is not unprecedented.) Come here then and you’re in the Sandwich Smith: a welcoming little den of exposed pipes, concrete floors and lots of sunlight streaming in through the windows. Streaming onto sandwiches.

Grab a clipboard and tick off the ingredients that you want to pile together—pulled pork, bacon coleslaw, housemade donut bun—and then take a seat and eat that sandwich. Frankly, that would be enough. See above re: donut bun.

But come back after dark, and... it’ll look pretty much exactly the same. You may even smell a final vestige of donut essence. But yeah, it’s dark. Maybe 0.003% more romantic for a super-low-key casual date. Congratulations, you’re in Fickle. Same chef, only now he’s more in the mood to serve you grilled quail, molasses pork belly and/or a rib eye.

Luckily, you’re in the mood to let him.