With Lamb-Vapor Mezcal, a Salsa Lazy Susan and a Chef's Table 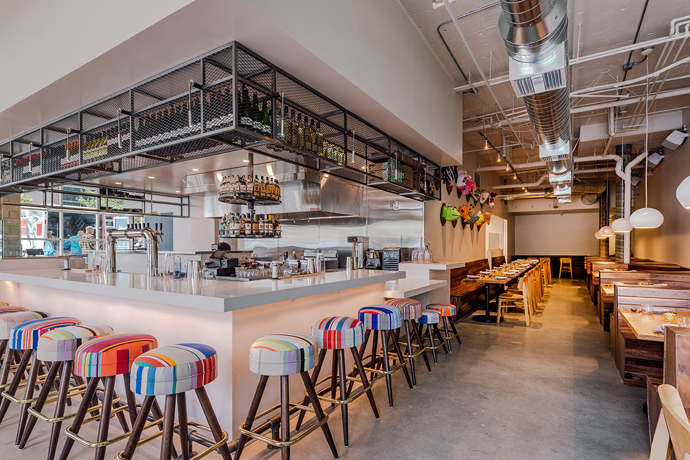 Yet somehow, life on the Westside of Los Angeles remained endurable.

Now, it's back and just called Punta Cabras. And when chef Daniel Snukal revives it on Wednesday, you'll find it's somehow more. Much more. You could alternately view this slideshow and then read on.

First, big collective "yay" for everybody's improved prospects for a memorable modern Mexican meal west of the 405: Yay. All thanks to this expanded new home of the once diminutive, Baja-inspired, internationally nuanced taqueria. Meaning, it's roughly a zillion times bigger. Smaller being not much of an option.

Come in the next time you're by the beach and chipotle-hibiscus aguas frescas are calling your name. Even if you ultimately do the Aromatherapy cocktail, curious as you are about its Mexican whiskey and its mezcal that they've vapor-infused with lamb.

You might proceed to the taqueria side to do fresh, gleaming cocteles and ceviches like you used to, along with new, handmade tortilla-encased creations like the albacore al pastor or beer-marinated steak with some pineapple pico de gallo or cashew crema from a salsa lazy Susan.

Or proceed past the pinãta heads to your four-top for a more in-depth dining experience. Where widespread Pacific flavors intermingle in oysters "Señor Rockefeller" baked with creamed hoja santa and uni.

And soon, when there's a special occasion to celebrate, you'll pick the eight-seat chef's table in the kitchen so he can dazzle you with a perpetually transforming tasting menu.

Word on the street: you're hard to dazzle.