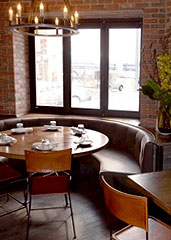 For years, the triangularly shaped space that was the A Street Deli sat quiet, hollow and lonely. Then, Ming Tsai of Blue Ginger (and... PBS-show-hosting fame) decided enough was enough. The result of his general angstiness: this new Japanese gastropub called Blue Dragon. It opened Wednesday. Here’s the hard data...

Number of people required for a reservation: 10
Chinese proverbs scrawled on the menu: 1
Dim sum items involving pot stickers scrawled on the menu (go for the braised short rib and Chinese celery): 2
22-ounce bottles of beer offered: 8
Number of those that are local: 5
Estimated amount of interior space consisting of weathered reclaimed wood: 78%
Chinese fireworks shells used as decoration near the bar: 15
Amount of fireworks you’re allowed to set off near the bar: 0
Rivulets of water cascading down the vintage mirror in the back: 12
Times saying “rivulets” could potentially inspire date-night poetry: 4 to 12
Available seats at the hand-built wood-top bar at 8:16pm: 1
Seat numbers at said bar with the best vantage points of the Japanese-y scene unfolding around you: 314 to 315
Escargots served with an order of escargot: 4
Dragon heads spotted on the walls: 4
Chances they’ll appear to come alive after too many dark-rum-heavy Loongs: 62.8%