And It Stoned You 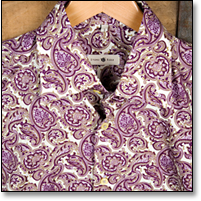 Last week was a bit of a blur, and though you've emerged from Basel intact, we can't say the same for your wardrobe. (To be fair, Dennis Rodman didn't mean to spill champagne on you.)

As you begin to refresh your closet, consider one of the new shirts from Miami-based Stone Rose.

The European-styled shirts are light and airy enough for Miami's sultry climate, but bring an understated class to help set you apart from the Zoolander set. (The shirts have actually amassed a bit of a following: You might have seen actor Seann William Scott wearing one on a recent couch—Oprah's, Tyra's, Jason Biggs'—or boxer Bernard Hopkins displaying one during a pre-fight press conference/brawl.)

Inspired by the owner's eclectic heritages, each look in the new collection is named after a corresponding airport code. While the DXB (Dubai International) is rich with floral and paisley prints (pair it with supreme confidence), the BCN (Barcelona) is the most formal, with stripes and a white collar. And then there is the top-seller, MIA. It's lively, full of color and has several different accents.

Although you'll still do most of the talking.

Style
Brickell's New Bespoke Suitery Has a Whiskey Lounge
It's Called Stitched, and It Would Like a Word With Your Body

Style
Come, Journey With Us to Kith
It’s Got Stuff for Your Feet, Your Torso and Your Taste Buds

Style
Rise and Shinola
Watches and Bags and Bikes in Wynwood

Style
Suit Yourself
Tailored Suits in a South Beach Penthouse