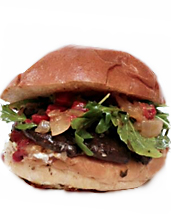 It saw the end of the Spanish Civil War. The release of Gone with the Wind. And, of course, the glorious birth of Cambridge’s beloved gourmet butcher shop, Savenor’s.

And now, some 73 years later, said shop has quietly decided to answer your cries for huge sandwiches using their meats. Finally.

Think of this as Savenor’s way of taking on the deli game themselves. So now when you walk in here or call them up, you can score made-to-order beauties like the Toulouse with Savenor’s duck confit, pancetta and pickled root veggies on a chewy torta roll. Or the Tonawanda with house-roasted prime beef and horseradish aioli on brioche. Or maybe just their pork shoulder, ham, pickled onion and Swiss version of the classic Cuban (call it Havana by way of Cambridge).

And if you’re closer to the Beacon Hill location, don’t feel slighted. They plan to implement the very same setup in their Boston proper spot over the next few weeks.

You win this round, Cambridge.

Drink This Black Gin on Halloween. Or Whenever.

This Fully-Loaded Cabin Has Walls That Open Up to Nature