Surfing in Chelsea. Sort Of. 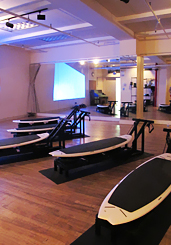 Stand up and take a bow. That’s an incredible performance.

Our advice: skip the gym and try the waters just off Kauai.

If you were up for the part of Patrick Swayze’s reckless, presumed-to-be-dead fraternal twin in Point Break 2, this would be the class you’d use to prepare for the role. And work in your stunt mullet.

The idea here: translate the moves a surfer does on the open water to dry land (“studies” show that when you eliminate the looming threat of Portuguese man-of-wars, you build lean muscle mass faster). The secret: a specially designed board that mimics the feeling of riding the perfect wave. Only with 100% less undertow.

Each class is led by an instructor (yes, she looks like an extra from Blue Crush) who’ll school you in how to pop up, duck dive, water walk, carve and shark kick (okay, that last one you’re already pretty well versed in). After 40 minutes’ worth of surf-inspired interval training under a ceiling of surf-inspired projected movies, the lights will be dimmed, the pace will be slowed, and you’ll wind down while stretching to the soothing sounds of the ocean.

Billy Ocean, that is.