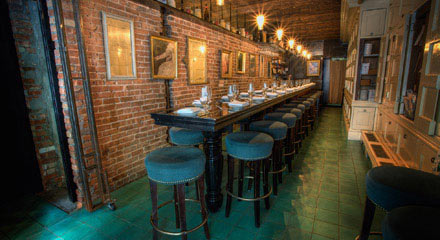 4 Photos Socarrat
You've never been a fan of one-stop shopping. You want your suit from an expert tailor, your cocktails from the best bartenders and, of course, your paella from the best damn paella restaurant in town.

Allow us to introduce Socarrat, the city's newest nook dedicated to the simmering Spanish stir-fry in all its forms, soft-opening Friday.

Just direct your paella-crazed cohort to the only spot in the place: a communal banquet table that just so happens to be decked out like Sunday night in Valencia, with a mirrored glass top and Edison bulbs dangling overhead, ready for your very own family-style feast. From the black rice paella—colored with squid ink for some maritime seasoning—to the fideua (a paella with noodles subbed for rice) that's making its New York debut, this kitchen has a handle on every variation you could want, all served with the old-world traditionalism that usually gets lost in the modern Spanish bustle. In other words, it's the real deal.

Of course, there are a few tapas for non-believers, but your only real distraction is the arsenal of Spanish beer (as long as the liquor license arrives before you do; if not, you're in BYOB territory). As for the main course, we're assuming you know what you came for.

Otherwise, you would have just gone to your usual jambalaya place.