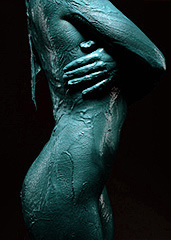 It’s been a tough week.

First came Monday. Then there was the heat. Then, the financial markets collapsed.

Don’t worry, things are bound to get better.

Better: a Thursday night fete with art, film... oh, and some naked models being painted on.

Presenting the RAW Boston party, a mishmash of dancing, short films, comedy and the time-honored art of body painting, going down at Guilt tomorrow night.

First things first: get to Guilt tomorrow by 8pm. Just trust us on this. You’ll first be greeted by a cocktail hour, during which you’ll carouse around the display gallery—absorbing everything from murals to photography to street art (leave your tagging spray at home, though).

If you’re into a leggy-model-filled fashion show, stand-up comedy, live music, short films (one is in French) and performance dance featuring the choreography team behind Bobby Brown and NKOTB, that will happen next. Then: DJs will take over for the dance party rounding out the night (along with your “Every Little Step” moves).

But before all that, you’ll be treated to a little performance art. By which we mean: a few models will emerge, they’ll make themselves naked, and an artist will draw and paint all over their bodies, creating live works of art for your aesthetic pleasure.