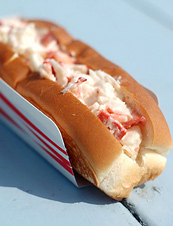 He’s hanging out off the coast of Maine, flexing his claws for the ladies, and then suddenly he’s whisked off on a plane to LA, where he finds himself... on a food truck.

Now, even for lobsters, it always comes back to the food trucks.

Introducing the Lobsta Truck, stocked with fresh, never-frozen crab and lobster flown in from New England three times a week, now quietly rolling on our streets.

Basically, this is your chance to finally bring a bit of prime East Coast seafaring to your next West Coast commute home. And after you’ve found its location on Twitter, it won’t be hard to spot this truck on the curb―it’s red, with a giant white lobster on it. (A boat would’ve been cumbersome on Sunset.)

The menu’s short and sweet―Lobsta Rolls and Crab Rolls (on a split-top roll, with just a bit of mayo or butter), and Clam Chowder by the cup or pint. (That one’s pretty authentic too, except for that inexplicable “er” at the end.) Throw in a whoopie pie and some Cape Cod chips, and suddenly Venice feels like Nantucket.