Like a Manhattan, but with a Dash of Tobacco 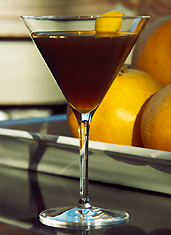 In effect, the city’s got a restraining order on smoking.

First it was in bars and restaurants. Now it’s the 15-foot perimeter around them—including patios, rooftops and sidewalks.

So, if that’s holding your addiction back, we’ve found a temporary work-around, and it’s not the patch...

Here to clear the air: The Mohawk, a devilish concoction of tobacco leaves and seven-year rye that’s a clean-air riff on the bygone pastime of smoking cigars and drinking scotch, available now at Lafitte.

Essentially, it looks like what you’d expect a tobacco cocktail to look like: it’s brown, and it comes in a martini glass with a lemon rind garnish (much classier than a match, or a used butt). But once you indulge, you’ll get a kick, followed by a hearty tobacco buzz, along with notes of smoke, earth and that tannic dryness you’d normally get from taking a drag.

Now, if you’re envisioning them breaking open cigarettes and muddling them into whiskey, allow us to set the facts straight. First off, no cigarettes were sacrificed for this drink. Instead, it’s a tobacco tea made out of uncured heirloom broadleaf tobacco, hot water, brown sugar and one or two other proprietary ingredients.

They take that brew and then prep a shaker with rye whiskey, sweet vermouth and bitters to create a cocktail that actually tastes very much like drinking a Manhattan while smoking.