Caviar and Cocktails in Tribeca 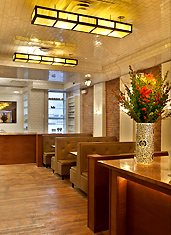 5 Photos Weather Up
You’ve always kept a close watch on the topographical caviar map of the city.

You were a familiar face during the limited run of the caviar Pop-Tart. You’ve experimented with off-the-grid roe treatments at Russian bathhouses. And your apartment is known in certain circles as “the caviar of fifth-floor walk-ups.”

So you’ll be especially interested in today’s late-breaking caviar news—the emergence of a new white-tiled wonderland of champagne cocktails and caviar in Tribeca called Weather Up, soft-opening this weekend.

Now, you may know the lounge’s cozy Brooklyn location, which has similar crafty cocktails but is lacking any sort of fish egg program. Not a problem here, where an after-work sojourn will have you entering a parlor of white tiles and flickering candles, set up perfectly for those nights when beers with colleagues morphs into a low-key after-hours feast of champagne, oysters and caviar.

Which is where the intimate banquettes built for two come in. It’s here you’ll want to ensconce yourself in the company of a late-night, embargo-defying date, and realize that it all comes down to one simple yet complicated task—choosing from among 20 rotating varieties of caviar.

Fortunately, there is no lack of liquid encouragement, like the Revolver (bourbon and coffee liqueur) and the Via Vero (rum and pear liqueur), both served with chunks of slow-melting ice created in a $6,000 ice-block maker in the basement.

Also known as the caviar of ice machines.