Live Music and Jambalaya in the DD 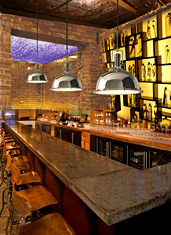 You go to the Design District for many things.

But starting this Thursday, you’ll be able to go for something you’ve never experienced there before: live jazz. Also: bourbon punch.

Say hello to The Stage, a New Orleans-style music hall and cocktail lounge, soft-opening this Thursday with a slew of concerts slated for this weekend’s Miami Music Festival.

Think of this as the kind of sprawling music club you’d find on Bourbon Street, complete with a massive stage for hosting local rock and jazz bands, an outdoor courtyard filled with plantlife and couches, and a polished cement bar with fedora-clad bartenders sliding you mint juleps and Bourbon Milk Punch (it does a body bourbon).

You’ll come here around 11pm to check out local troubadours and DJs, and also when you’re in the mood for a nightcap after dinner at Sra. Martinez (it’s a few blocks north). They’ll even be doing some screenings of documentaries and holding the occasional poetry slam (it’s the perfect spot to unveil your haiku to bacon).

And in a few weeks, they’ll be rolling out a food menu stacked with N’awlins classics—think jambalaya, beignets and layered sandwiches called muffulettas.