Finally, a Machine That Gets You 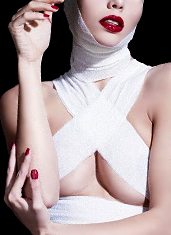 So we were thinking. The holidays are right around the corner.

But by this point, it’s at least worth considering that some gifts require a bit more thought than others in order to get them just right. And in some cases, a bit more machinery.

Take, for example, the gift of...augmentation.

And for that, we turn to the Vectra 3D, a futuristic machine (and the only one of its kind in the state) that shows you exactly what the gifts that keep on giving—okay, her implants—will look like, in 3D, now taking appointments at the esteemed offices of Dr. John Connors.

So let’s say you and your significant other(s) are out shopping for breast implants. Typical day so far. But you keep running into the same problem…you have no idea what they will actually look like after the fact. Enter: this thing.

After a brief chat with Dr. Connors about the finer points of size, comfort, speed and/or durability, your lucky recipient will disrobe and step in front of a giant white machine equipped with six cameras (two in front and two on each side) while Vectra snaps away from all vantage points. From there, the party pics are transposed onto a computer screen, yielding a perfectly accurate, post-op 3D image, which can then be viewed and virtually tweaked from all angles.

Which is pretty much the science version of the best video game ever.

Or the video version of the best science game ever.

Gear
The Rejection List
The Things We Left Behind in 2013

Gear
Give Free or Die
It’s Okay. Your Gift Guide Is Here Now.

Gear
The Rejection List
The Things We Left Behind in 2012

Gear
Just in Case
Speakers Made Out of Old Suitcases