The Booze You Can Lick 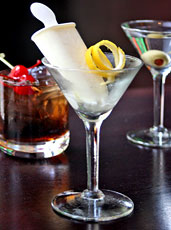 There's a tiny bead of perspiration on your forehead.

Maybe it's your work ethic. Maybe it's this mid-70s heat wave. All we know is, you look like you need to cool down. Or maybe just have a drink. Or both.

Introducing The Booze-sicle, a wild concoction that's pretty much exactly what it sounds like, being served at Prairie Fire starting today.

Think of this as the kind of cocktail Jack Frost would enjoy when he's getting ready for an evening of nipping at someone's nose. Yes, it's a popsicle, which means it's served on a stick—generally something we don't recommend outside of kebab restaurants and street fairs—but some rules are made to be broken. Particularly ones where booze is concerned.

So on those days when it's so hot you can see those wavy lines coming up from the pavement, pull up to the bar and order the flavor du jour. They're starting with Lemon-Vodka, but as summer progresses you'll find cherries, peaches and blueberries making appearances. There's even been talk of a Bourbon Fudge-sicle...

Yes, the heat can make you do crazy things.