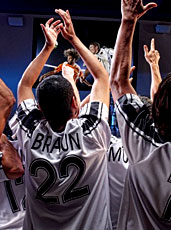 The World Cup is now.

You could still probably get to Johannesburg if you have a burning desire to take in all the patriotism, dedication and head-butting of the Copa Mundial in person.

Or you could allow us to direct your attention to a little street called Mulberry, and the city's very first World Cup pop-up soccer stadium.

Introducing PlayBeautiful, a temporary, stadium-seating, big-screen soccer nexus, opening for the second week of the Cup for your match-watching, jersey-acquiring and party-throwing pleasure, taking reservations now.

Think of PlayBeautiful as a cathedral to the glory and frenzy of the Cup: there's a pair of six-foot projection screens for watching every single match, bleachers for seating, Astroturf for that reassuring grip under your cleats, an official FIFA merch booth, soccer demonstrations and even tacos from Casa Mezcal (suggesting a possibly unethical favoritism for Team Mexico).

You should also know that seats are gratis, as long as you make a reservation ahead of time. Or you could do what you usually do and book the entire stadium for an open-bar match viewing (or nighttime re-viewing) of your choice, invite 75 of your friends who look the best in kneesocks, and generally explore the more civilized side of hooliganism.