Hair of the Pig 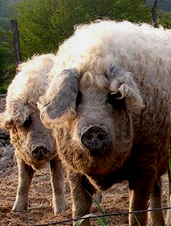 When it comes to the subject of pork, we'd venture to say you're something of a connoisseur.

You've used it as a spread, speared it in many a Bloody Mary and drank it in your morning latte.

Yet you're still looking for the next frontier…

Which is why we think you should know about an ancient Austrian worker pig bred for its lard, boasting rolls of succulent fat that creates a flavor unlike any pork we've ever known…

Say hello to the Mangalitsa Pig, now in San Francisco for the first time, and appearing in three separate but equal venues: an underground supper club, select restaurants and even your home (because once you've had it, you'll need to keep a stash nearby).

We wish we could report that these hairy pigs sat around drinking beer and getting massaged all day to acquire the deliciously creamy marbled meat it's known for. But instead, these beasts were tough-guy pigs that roamed Central Europe's frost-covered fields and subsisted on barley, hay and the occasional acorn for maximal fatness (read: peak tastiness on your plate).

You could dabble in it at Frascati over a few bites of slow-roasted Mangalitsa pork belly. Or, go all the way Thursday night at SubCulture Dining's Mangalitsa and the CajaChina nose-to-tail dinner. While we're not at liberty to divulge the menu's exact dishes, we can mention that some of the prized pork will be cooked in the CajaChina roasting box. And that Chef's order includes belly, butt, loin, heart, liver and fat.

The Cobblers Are Here to Save Your Shoes