A Peek at Obama's BlackBerry 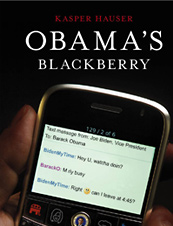 You've been looking for something to read at the beach this summer. Something wry and witty and incisive. Maybe even a little political. And, if it's not too much to ask, with chapters that clock in right around 140 characters…

This funny piece of summer fluff has blown in from San Francisco by way of a comedy collective known as Kasper Hauser. They're not exactly Kerouac. (Their last send-up took on that weighty subject of the SkyMall catalog, consequences be damned.) In this effort, you'll be treated to about 100 different BlackBerry messages, such as this exchange between the commander in chief and Hillary Clinton:

HBomb: r u still mad about the primary?
BarackO: no, why?
HBomb: why am I flying coach class to zimbabwe?
BarackO: have fun eating pretzels and watching marley and me :)

But on the plus side, it won't drain your battery.