And Soon, It'll Have a Clandestine Karaoke Lounge and a Steakhouse 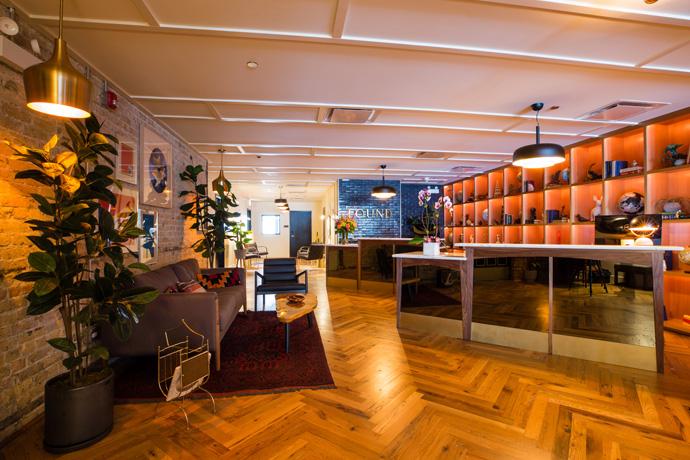 The Angelenos are coming.

The h.wood Group is a name you ought to know as they make their foray into Chicago with a bare-bones-yet-somehow-still-sexy hotel called FOUND. It's open now, so take a look around.

It's a former apartment building that's been converted into this 60-room leisure palace. True to its name, the lobby is filled with found objects. A woven dreamcatcher here. A porcelain rabbit there. Mid-century modern furniture everywhere. You'll be greeted at one of two gold-accented desks, which is when you might realize this isn't your average sleepery.

Head upstairs and down the navy blue hallway to your minimalist room. Minimalist as in a white bed covered in super-soft sheets, a matching blank-slate bathroom and... not much else.

Drop your bags and return to the lobby, where you'll get acquainted with the adventure concierge. She will send you (or, more likely, your visiting dignitaries) on your way with a custom-tailored itinerary filled with secret bars and locals-only restaurants.

Then, come May, you'll have VIP access to Mason and Blind Dragon. The former will be a throwback steakhouse offering dry-aged steaks and dry martinis. The latter will be an opium den-like speakeasy with leopard-print-carpeted karaoke rooms.

For now, though, the basement lounge filled with tribal-inspired throw pillows and vintage board games will have to do.

How are your Chutes and Ladders skills?