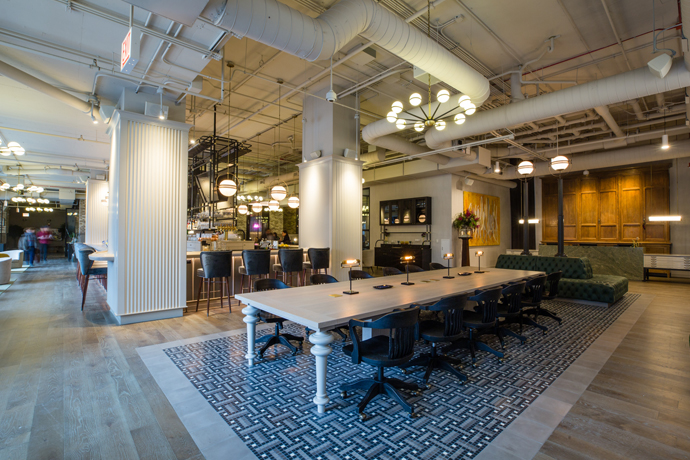 Admit it, it's been a while since you've been to Wrigleyville.

No matter. You're damn sure going back now.

Because as of today, the neighborhood is just a little bit less about baseball and a lot more about this swanky new funhouse called Hotel Zachary. It's open now, so first, have a look around.

Now, behold its many wonders...

Of course, it starts with a grand staircase. And portraits of the hotel's namesake, architect and Chicagoan Zachary Taylor Davis, as well as his wife, Alma. They've both been given the 21st Century treatment by a local artist who outlined the dashing couple in strokes of blue and pink paint. Upstairs, the lobby is filled with Davis' blueprints and drawings of the hotel's historic neighbor, Wrigley Field.

There's also a bar, naturally. It's hard to miss the floor-to-ceiling, booze-covered metal shelving surrounded by a wooden bar top that, not coincidentally, reminds you of the woodgrain of a baseball bat. There, you can sip on a Zachary Stinger made with rum and sherry, and eat soft pretzels with sriracha pimento cheese and beer mustard. It's a good place to start before making your way over to the fireplace nook or one of the brown leather booths, designed to be reminiscent of baseball gloves.

The breakfast room is especially charming. Maybe short rib hash alongside antique cabinets filled with china is more your thing. You can have that in the Alma Room, the hotel's restaurant offering breakfast daily. But mostly, they let their neighbors do the cooking. West Town Bakery and Tap and Mordecai are just two of the new restaurants opening in the coming weeks on the building's ground floor. Big Star is another.

You won't believe the view. All this and you haven't even made it to your room yet, which is the Marquee Suite. Like over half of the rooms in the hotels, it overlooks Wrigley Field. As in, you can see the infield from your sitting area, which is filled with architectural accents like filing cabinet-inspired dressers and hundreds of blue books.

Life's good in the nosebleeds.

This New Antarctica Camp Was Inspired by Space Travel