Finding the Perfect Jean Jacket: A Story in Four Parts

One Man's Finicky Mission to Purchase a Spring Wardrobe Staple

I used to have a denim jacket.

It was the ‘90s, far before this particular article of clothing achieved its current era of cool. Moms wore it; Dads wore it; I wore it with a badass backwards hat, far too big for my head. I was young, ambitious, wide-eyed, the future sprawled out ahead of me like the denim aisle at the local department store. I was five and sitting in a frickin’ wagon, being pulled along by my Mommy.

Since then, at various times in my life, I’ve debated the relative merits of the jean jacket*, posing questions like: Should I get one? When would I wear it if I did? Am I cool enough? Where’s my phone? Where’s my fucking phone?

But now I feel the time has finally come. Spring is in the Chicago air. And I’d like something to wear on a clear day, sun out, a cool breeze, the wind blowing in my hair (although, not really), that isn’t a cardigan or a bomber. Thus, the mission for the perfect jean jacket began...

*I will be using the term "jean jacket" throughout, even though it's probably an outdated Midwestern-ism, and fails to acknowledge the various and specific ways—selvedge, crushed, raw, colored, etc—in which we classify denim (and denim jackets) nowadays, because I'm an outdated Midwestern.

Chapter 1: A Vintage Store, My Brother’s Subway-Greased Cuff and a Fatuous Dialectic on Authenticity
A jean jacket is, like the graphic tee, an article of clothing you either often buy used or buy new-to-look-like-used. It occupies an entire rack at many a-secondhand shop, right next to the one full of musty-smelling flannel shirts and vests from the ‘70s nobody buys unless they’re required for a Halloween costume or something. I’ve encountered many, most recently in a classic college-y thrift shop on the Oberlin campus, in Ohio (don’t ask), hoping that, if and when I tried one on, I would look in the mirror and know, right then and there, that this jean jacket was for me, that my life would be irrevocably changed, that I could magically ride a motorcycle, or play guitar, or look cool smoking cigs. Alas, such a grunge-y glass-slipper moment has not yet come to pass. I have lost faith in the resale store jean jacket, because fit, with a jean jacket, is of the upmost importance. And the oversized look is not really my bag.

Still, I’ve struggled to move past the lame-seeming idea of purchasing a new thing that looks old. I am someone who purports to care about outdated notions like “authenticity.” Why should I buy a simulacrum of something rather than the thing itself? Am I not contributing to late-capitalist appropriation of old things-made-new, the conflation of real and hyperreal? Am I tainting the purity of the original by purchasing a glorified knock-off?

Maybe, but probably not. Be that as it may, such considerations were rendered moot when, upon losing a drinking game-related bet, a friend of mine had to lick the cuff of my brother’s old, unwashed, too-big, NYC subway-greased jean jacket. The utter revulsion this inspired in me was too great; I felt as if I could taste the bitterness of the cuff on my tongue. Authenticity be damned: I was buying this thing new.

Interlude 1: A Brief Check-In on Grailed
Before totally dismissing the idea of buying one used, I did do the responsible thing and take a casual spin through Grailed, the online resale boutique for covetable  men’s clothing (or, “grails,” in #menswear parlance).

I found a few I liked, that were actually relatively cheap.

At the end of the day, though, I realized that I wanted to be the one to do the noble work of distressing a jean jacket. And that nobody, no matter how handsome their jackets are, can do it for me.

Chapter 2: To Levi’s or Not to Levi’s, That Is at the Very Least a Question
When it comes to the jean jacket, particularly the relatively affordable jean jacket, it’s hard not to consider Levi’s regular line first*. They’re timeless, yet fresh. Not cheap, but not too expensive either. There’s variety. And their commercials make me want to dance in a dive bar to a doo-wop song some mysterious girl with blue-streaked hair threw on the jukebox with a dog-eared copy of Leaves of Grass stuffed un-ironically into my back pocket. They’re pretty much the standard. Nobody would give you shit for wearing a basic, non-vintage or specialty-line or collaborative Levi’s jean jacket—not that anyone would give you shit for wearing a non-Levi’s jean jacket—but nobody would be like, “Sick jean jacket” about your Levi’s jean jacket, either. Did I want someone to nod slyly and comment “sick jean jacket” to me? Or did that not matter? Coincidentally, purchasing a Levi’s jean jacket, a perhaps timeworn symbol of ‘60s-era rebellion and non-conformity, took on the slick texture of conformity.

I decided to put these messier questions that really shouldn’t pertain to buying a jean jacket aside and judge the Levi’s on the quality of the jackets themselves.

A few notable current offerings from their site*:

The Sherpa Trucker, $98 (more on this later)

I did like the Indigo, but nothing stopped me in my tracks. The search continues....

*Of course, there are more Levi’s jackets out there than the ones I've included, and way more than the ones just on their site. Both their Made & Crafted and Vintage lines are of a higher quality, and certainly pricier. They also do any number of high-fashion-y collabs (more on those below). This reproduction of a 1934 model, which I found on Unionmade, is a fucking gem, but it’ll cost you close to $400.

Interlude 2: A Debate with No One on Whether or Not to Get a Black Jean Jacket
The black jean jacket is kind of a statement piece.

But you can’t wear it with everything.

But it’s kind of too edgy.

But don’t you have too much black in your wardrobe already?

But does the black jean jacket defeat the fundamental purpose of the jean jacket, as you conceive of it?

Chapter 3: A Legitimate Consideration of Washes, Graphics and Contrast Collars

Having dispensed with the black jean jacket—deciding, as it were, that it was a little bit too specific for what I imagine will be an everyday kind of jacket—I wanted to evaluate jean jackets of various light-washes, colors and out-there varieties—just to makes sure I didn’t miss anything before settling for something a bit more routine.

An editor of this very website, at my request, sent along some suggestions, one of which included this Stone Island brown denim jacket ($90)—which appealed greatly to my color palette and sense of wanting to lie down and completely blend into a ‘70s-era shag carpet. 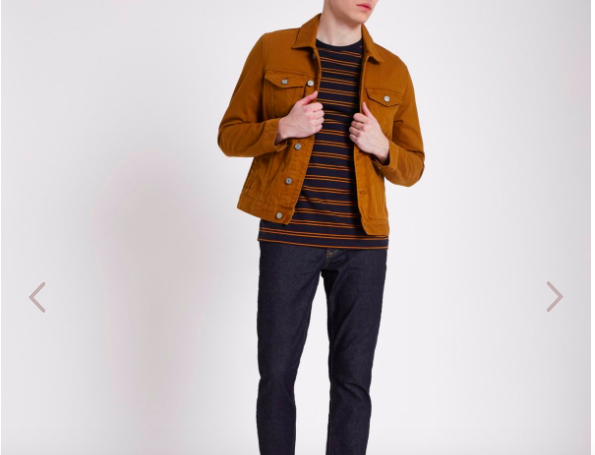 I never thought white denim would be for me—I imagine myself getting into too many spring-related tousles on grassy knolls and the like to keep it clean; jk, I just don’t think I could pull it off—but even I had to admit this one, from Rag & Bone ($295), with the black buttons, might be worth the attempt.

I’ve gone back and forth on the light-wash denim. I recently picked up my first pair of light-wash jeans, mostly as a reaction to always wearing darker pairs, but I don’t know if I’m quite ready to adapt that mentality to the jacket. I’m a first timer here; however, I can imagine my future, wealthier, more self-confident self wearing this bad boy from AMI ($335).

Something about me is inexplicably drawn to the shearling collar jean jacket concept. But I think, at the end of the day, the look is better reserved for the flight jacket. And I don’t know if I have the budget for two. This one from Levi’s ($70), though, is probably what I’d go with. 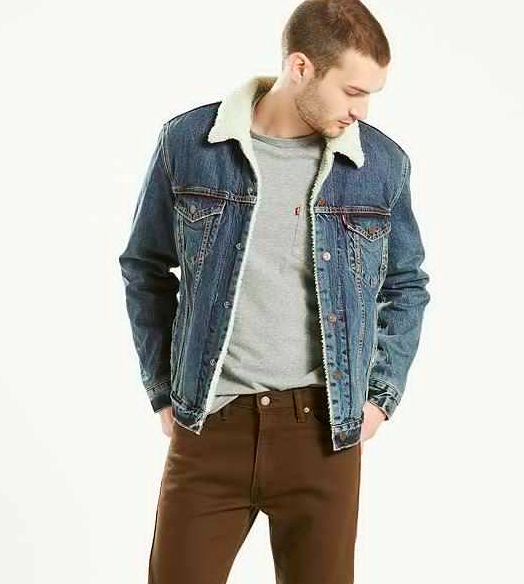 I love the contrast collar on this A.P.C. number ($370), and the Japanese stonewashed denim. But something about it also taints the purity of the jean jacket for me. And I'm nothing if not a jean jacket purist, despite not currently owning one.

Herewith, a few truly boisterous options I kind of love and kind of hate but also just can’t imagine wearing in real life as hard as I try. 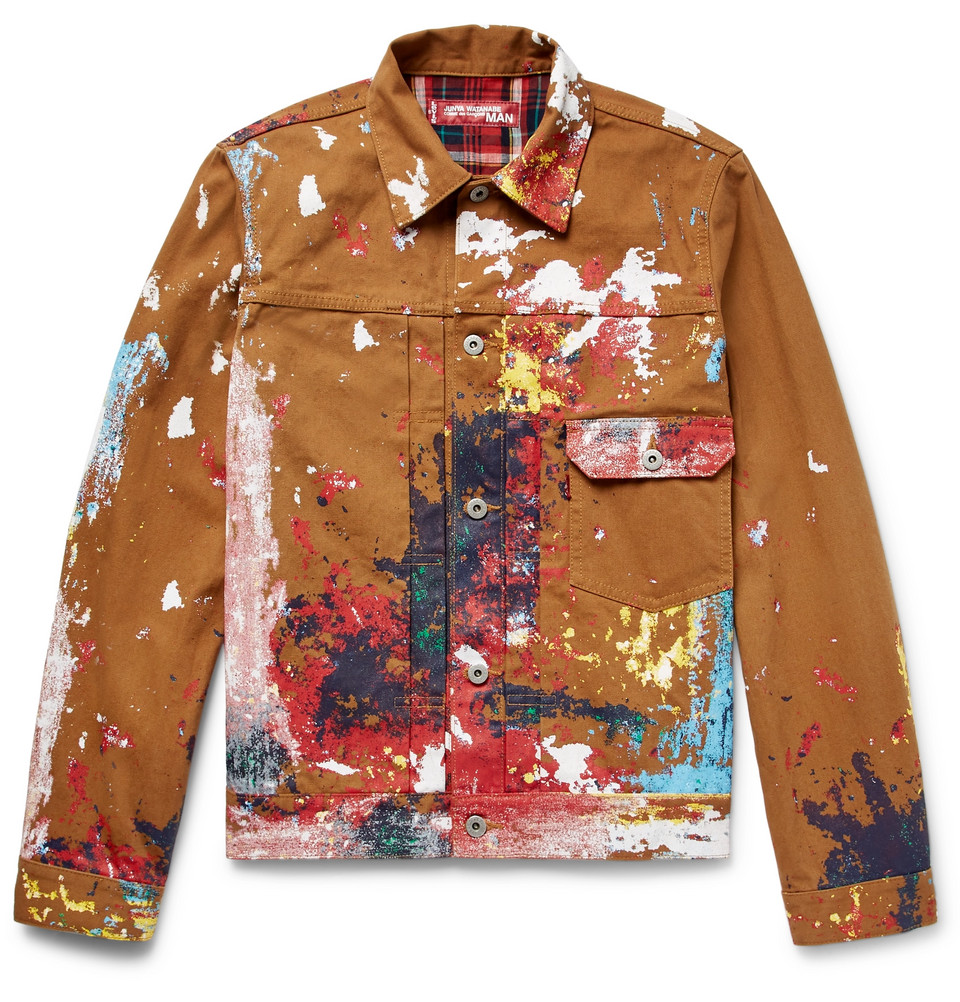 Chapter 4: Just Keep It Simple aka This Isn't Life or Death, It's Just a Jean Jacket
After throwing up a hail mary on the unorthodox jean jackets, I decided that if I were ever going to find the perfect jean jacket, I’d need to keep things simple—to go with my gut. And my gut was telling me, “Go with something dark, maybe indigo,” as well as: “I'm really tired of looking at jean jackets.” I’d explored so many other options, enough to know what I didn’t want, couldn’t afford, couldn’t pull or simply wasn’t ready for—physically, mentally, emotionally, sartorially, sexually(?).

That’s how I ended up here, at Todd Snyder—one of my favorite menswear brands, but one from which I own very few pieces—with a pricey, but not-outrageously-pricey Made in Los Angeles Denim Jacket, made from old-school US denim, with a classy indigo rinse. It’s versatile. It’s well-constructed. It’s the right fit. It'll probably (hopefully) be on sale sometime in the near future. And it’s something I can imagine wearing, if not on a daily basis, then at least several times a week this spring.