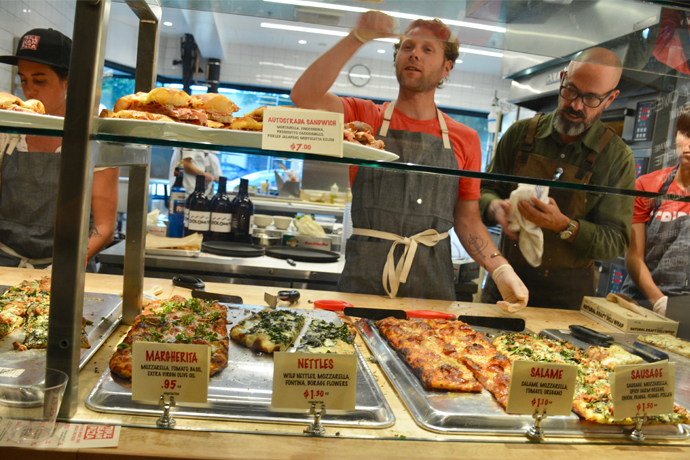 No, that wasn't a tremor you felt this weekend.

Or another of Elon Musk's pesky sonic booms.

That was just the collective sound of jaws dropping as Nancy Silverton opened a new pizza place with Matt Molina.

Its name is Triple Beam Pizza, because it actually weighs out your pizza on scales, and it's now soft-open in Highland Park.

When you step inside, you'll see a tiny, red-and-white, casual spot with a big fat line. And a team of aproned people cutting into oblong, room-temperature, thin-crust Roman pizza pies with pairs of scissors.

You'll find five varieties at the moment—like the one with Yukon Gold potatoes and black truffle cheese, or the one topped with wild nettles and borage flowers—and then you'll need to do some fancy approximating.

Because here, you need to describe how much pizza you want by length, using your fingers. Then they'll weigh that by the ounce and put it on your tray for you to eat on their back patio with a glass of house red.

And say you don't want room-temperature Roman pizza at all. Silverton also has a rendition of the autostrada that she used to serve at La Brea Bakery. That's a quick Italian sandwich stuffed with thin pork cuts and spread with pickled-jalapeño-muffaletta relish.

It's just a little weird that you walked into a pizza place, though.