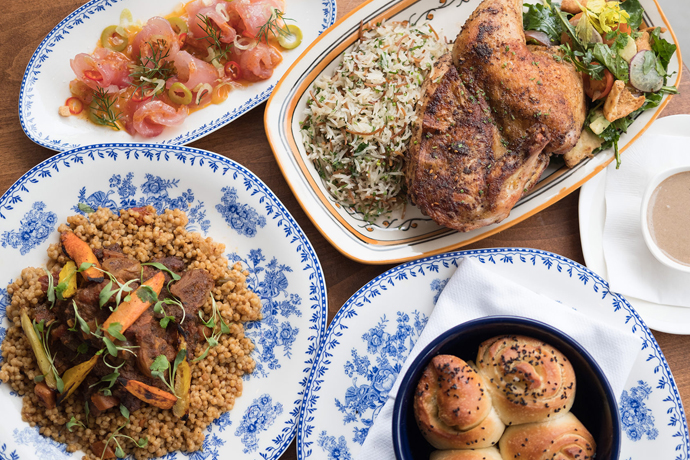 Jaffa is the name for the oldest part of Tel-Aviv.

And the youngest part of 3rd Street.

We're not here to say which has the greater roasted barley-and-tequila cocktails.

All we know is that the LA Jaffa opens Wednesday, it'll serve modern Middle Eastern cuisine from chef Anne Conness, and this is what it looks like.

A refreshingly bright room in a town half composed of reclaimed wood, indeed. With stone walls enclosing shelves stacked with Israeli products and a dominating central bar of marble. You could accomplish things with a bar like that.

Like meeting a date there after work. At which point a Varnish vet will make you something you've probably never tried before. Like The Barley with tequila, mezcal, pineapple, turmeric and roasted barley. Or a non-alcoholic Old Fashioned using Lapsang tea. Feel free to cite antibiotics.

But you could just as easily come with a group of friends or associates for a shareable feast. Passing around plates of crudo, couscous with lamb and dried figs, Yemenite rolls, fattoush and spiced dorade. Such things will only bring you closer.

Just don't forget to end the meal with a traditional shot of Lebanese Arak.

You'll be a little behind after that Old Fashioned.