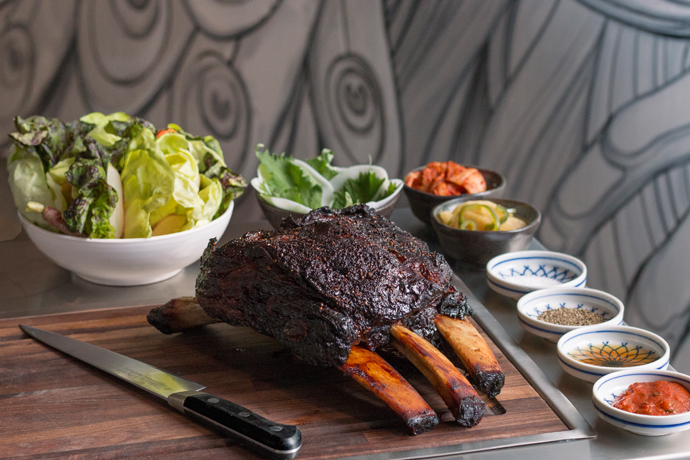 He's gone and opened a restaurant in Los Angeles that will feed you entire pork bellies and a whole smoked bone-in short rib.

It's called Majordōmo, it's open now in Chinatown from the Momofuku empire and here comes a brief pause so you can make your reservation now.

It's a big industrial warehouse stamped with a neon peach and kitted out with walnut surfaces, big bay windows, jars full of fermented stuff and the occasional graphic bird panel or David Choe piece. Sit a spell with friends at a four-top and note the menu's complete lack of pork belly buns and ramen.

Because, yes, you're here for some different things. Like Chinese bing bread with a bevy of available spreads like chickpea-and-uni and spicy lamb. And fried butterball spuds under a mess of puffed rice, peanuts, chilies and salsa seca. Don't worry, someone will help you pair that to a nice Riesling. Probably someone who works there.

But all of that is just mere foreplay to the hulking forms of meat you're soon going to be sharing. Like the giant glazed pork shoulder or bone-in short rib that Chang is smoking for you and five friends.

Hope he's not being presumptuous.