A Chicken-Centric Lunchery From the Hawker Fare Team Takes Oakland

Khao Mun Ghai Is Back, Plus Twice-Fried Chicken Sandwiches 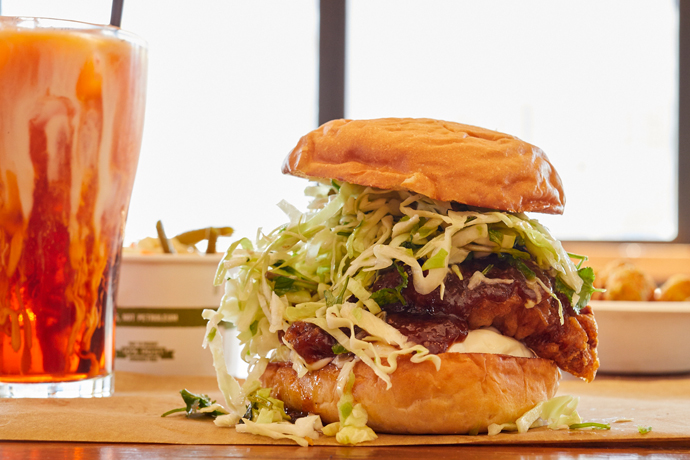 When Hawker Fare closed, you lamented the loss.

Not of the restaurant, per se. But definitely of the Khao Mun Ghai chicken.

Well, and also the restaurant.

But alas, what's lost but not forgotten is never truly lost. Especially considering the fact that Hawking Bird—a fast-casual spinoff from the Hawker Fare team—is now soft-open in downtown Oakland to eliminate your lunch-related woes. Check it out.

You and some fellow sustenance enthusiasts will enter this sun-drenched spot from its bright yellow and teal façade and notice, well, more bright teal inside. And smells. Every last glorious smell that you've been waiting all this time to smell.

Thankfully, they've brought back Hawker Fare's Khao Man Ghai chicken that's cooked in aromatic chicken broth and served over rice. You'll get that, of course, but also maybe the fried chicken that was marinated in garlic and ginger, rice-flour battered, then twice-fried before being made available in either "sandwiched," "boxed" or "nested" form.

The bar isn't a thing during the soft-opening phase (patience, friend), so instead, you can BYO favorite beer for now. Upon settling in at your table, maybe you'll decide that you also need one of their extras, like tater tots. Or like adding a fried egg to anything. Yes, anything.