Sometimes You Need a Cabaret With Exceptional Mediterranean

For Those Times, Here’s the Green Room 42 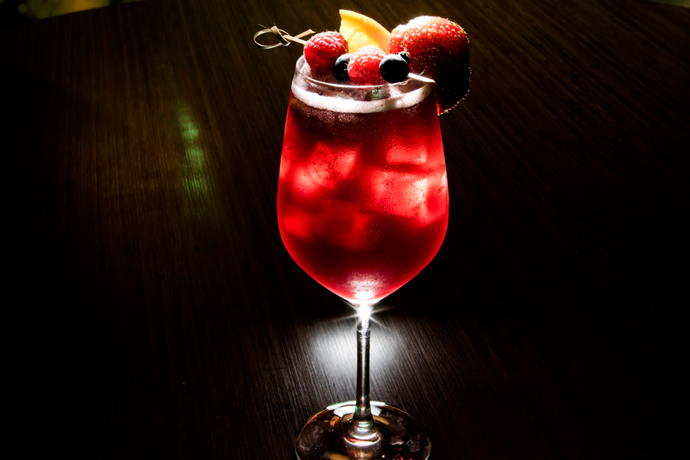 11 Photos The Green Room 42
“No, I’ve got a better idea. Let’s do an underwear-themed Mediterranean brunch.”

Such is a thing you can say before leading your friends to the Green Room 42, a handsome cabaret with some rather unique programming, now open near Times Square.

It’s in Yotel—that futuristic-looking ultramodern hotel with luggage robots and a 7,000-square-foot terrace. Head there, through the fourth-floor lobby, then burst through the graffiti-laden doors and into the cabaret. Now, depending on when you’re there, things could go one of two ways:

You’re here for an evening show. Cue the moonshine cocktails and recognizable faces on the stage.
Find yourself here on a dinner date, claim a couple of chairs (they’re lucite, for all you industrial design buffs out there) and ask for something like a Mexican Spy (honey-habanero moonshine, pineapple juice) or She Used to Be Wine (cabernet sauvignon, cardamom, ginger, star anise). Someone who’s been on Broadway may be on the stage. You’ll pay them most of your attention, though you may be distracted by your pot-pie-like crust filled with beef kebab, grilled and charred vegetables, and tahini cream. Which is understandable.

You’re here for brunch. Prepare for many prosecco cocktails and enjoyable, albeit kitschy, things happening onstage.
It’s a good place to enjoy a group of friends and bottomless prosecco drinks, and themed dishes like the (wait for it...) Out of the Boxers (falafel waffle, tahini, bacon) or Buns to Squeeze (fried chicken cutlet, slaw, housemade barbecue) while you reflect upon what the hell is happening onstage. Which will, for the record, be a singer/songwriter duo called the Skivvies performing in their underwear. Hey, we warned you.

And try not having fun saying “falafel waffle.”