There’s Sushi in Your Croissant

It’s Like the Filet-O-Fish. But French and Japanese and Better. 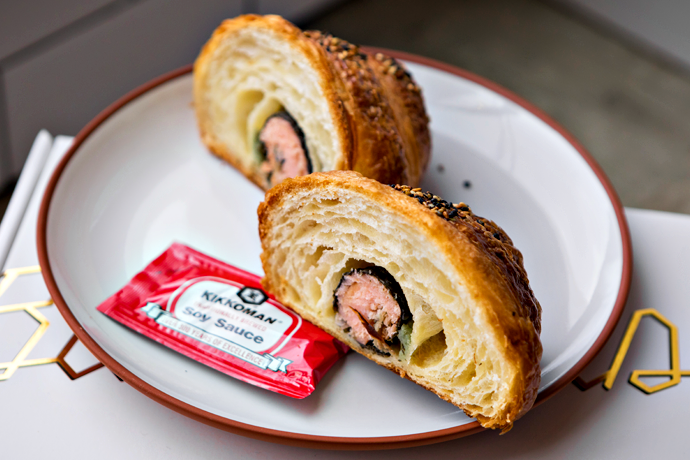 We won’t point out the myriad disheartening ways things are different in 2017.

We’ll just point out that people require soy sauce with their croissants now.

So in the name of deliciousness and cultural diversity, we present the sushi croissant.

It was dreamed up by Mr. Holmes Bakehouse, a San Francisco bakery that recently opened in Northeast LA’s Highland Park. Having envied our peers’ ability to eat such things in the northern climes of California, we were pleased when it suddenly turned up down south. So we put our taste buds to work to determine if it has any kind of permanent place in the lineup of weird shit we’ll eat.

The croissant comes in a box that says “I Got Baked in LA.” Like a puppy donning sunglasses, this indicates that it’s not like other pastry boxes and is, in fact, “cool.” Upon reveal, the croissant looks just like a croissant, all big and light and golden and flaky. With a rail of furikake forming a slim trail over the crest of its shell.

A sushi croissant could go either way. It could be the next sushi burrito, a trend we’ll indulge in on occasion. Very stoned occasions when it’s right in front of our faces. Or it could be the next fermented shark, leading to the denouncement of food and its ingestion forever.

Upon first bite, it turns out the croissant is filled with smoked salmon, not quite the raw fish we had expected, making this sort of like a French-Japanese-Jewish affair. An affair that is as enjoyable as it sounds.

The buttery croissant is essentially a substitute carb for rice, its delicate layers compacting and suffocating the salmon into a chewable bite of fatty fish with sporadic blows from the ginger, nori and wasabi. The thing comes with soy sauce packets, adding a salty punch to the bread that feels parallel to sopping up your plate with spare dumpling skin during your dim sum Sunday brunch.

So what reads a little outlandish on paper turns out to be more of a convenience. A snack-time version of a savory seafood pie. The sushi croissant is really a handheld version of salmon en croûte or the pastry-sheathed, often salmon-or-sturgeon-based savory Russian pie known as kulebyaka, accenting the delicacy of seafood with the crumbling texture and gentle sweetness of a finely baked, flaky pastry. Or, as we might say here in the USA, it’s like a Filet-O-Fish. Except kind of French. And Japanese. And better.

With all that international influence and the admirable execution, you’ll want to try the sushi croissant for yourself if you’re generally open to smoked fish and carbohydrates. The baking here is excellent. And surprisingly, so is the sushi-making.

Not that you’d ever judge a Mr. Holmes Bakehouse by its cover.