One Man’s Brush with Iceland’s Most Unusual Food 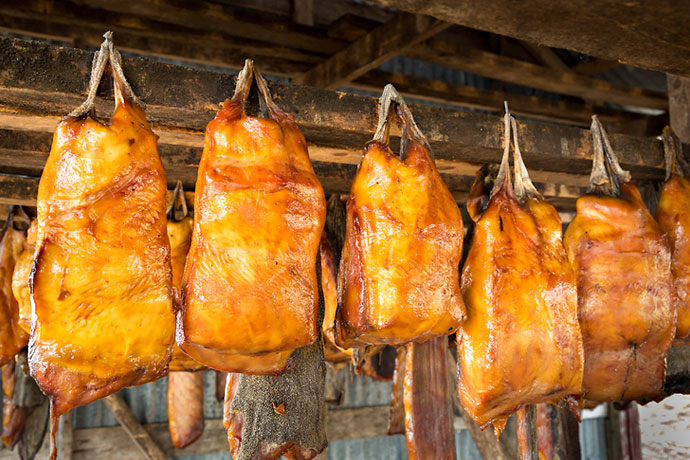 It’s the dish Anthony Bourdain described as “the single worst, most disgusting and terrible-tasting thing” he’s ever eaten. The food that’s so offensive, Gordon Ramsay spat it out. Which is in part why I had to try it. If their reactions were for the camera, I wanted to call their bluff.

I’ll spare you the suspense and admit—they were right.

Fermented shark, or hákarl in Icelandic, is (ironically) a Greenland shark that’s been buried and pressed under gravel and stone, then hung and cured for months, wherein it develops a scab-like crust. It’s only ready to eat (against probably a whole slew of American FDA rules and, like, basic hygiene) after the exterior has sufficiently decomposed.

So obviously I had to try it. And while eating shark can be controversial, hey, when in Rome. Except, you know, Iceland.

My girlfriend and I found some while navigating the Kolaportið Flea Market in Reykjavík. Kolaportið is really just a warehouse where locals sell things like hand-knit wool sweaters, old DVDs and rancid shark meat. Your classic flea market stuff.

The shark was cut into small bite-size cubes. The packaging was nothing more than a small plastic cup, like the ones in which restaurants put to-go ketchup. It was dangerously unassuming.

We made the mistake of opening our shark container indoors. I gagged. I couldn’t believe that something that smelled this awful was meant for human consumption.

I found out later that the smell comes from ammonia, which is found in urine, which sharks excrete through their skin. Which... is something I’m glad I didn’t know going in.

I also found out that Greenland sharks are extremely poisonous and have a good many toxins (aside from the ammonia) that must be squeezed out. There’s probably an easier, more modern way to do this besides shallow holes and gravel, but they’ve been preparing it the same way since the days of Vikings. So, tradition and all that.

But back to the eating-it part. My girlfriend and I decided we needed a less crowded place to do so—ideally, a place with booze to wash it all down. So we settled on a bar where we were the only patrons.

“What’s that smell?” the bartender asked while pouring my beer.

My girlfriend gave a nervous laugh and, for some reason, offered the bartender some, which she unsurprisingly turned down. So far, the only person supportive of our endeavor was the guy who sold us the shark. But instinct tells me he had a vested interest.

Undeterred, we sat by the open door hoping the air would circulate the odor away from other future patrons. I tried it first.

We were given toothpicks because you really, really shouldn’t touch the stuff. It’s one of those stenches that’s impossible to wash out of your hands, like ghost peppers or cigarettes. I made the mistake of bringing a piece to my mouth slowly. My brain said, “Don’t,” but my curious stomach said, “Shut up, brain.”

The initial flavor was largely underwhelming. The following flavor, however, was overwhelming. It was heady. It was all-encompassing. I felt a tingle in the back of my skull. It tasted like regret. It was hard to swallow and my throat kept closing up in a natural defense mechanism. Every second that passed with that one, small bite in my mouth made the experience that much worse. I finally choked it down with a few swigs of Gull, Iceland’s lawnmower beer.

“You know,” I said, “it wasn’t that bad.” Perhaps a lie (definitely a lie), but I wanted to be encouraging. Even if my face read otherwise.

It was my girlfriend’s turn. She learned from my mistake and took her bite quickly. Then promptly spat it out on the bar floor. Fortunately, the bartender wasn’t looking our way, which gave us a minute to remove the evidence.

I had read all about fermented shark being a national delicacy, but I can’t see how. I asked an Icelandic friend if locals actually eat the stuff.

“No,” he told me. “The only people who really eat it are old people and tourists.”

It was a trap.

I ate fermented shark. And all I got was this harrowing story.