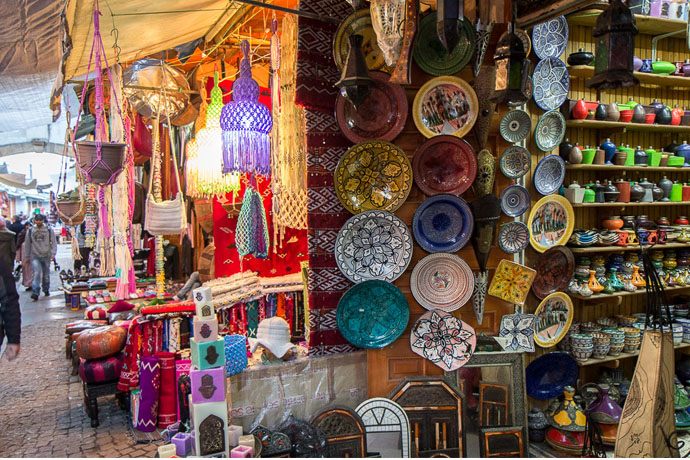 Next up, our man on the ground heads to Rabat.

General Notes
Walking through the old Moroccan medinas—particularly the one in Fez, which was founded in the ninth century and is considered one of the biggest car-free urban areas in the world—you’re hit with an awesome surfeit of sights, sounds, smells and stuff. A panoply of leather goods—coin purses, bags, belts, slippers. Adidas Superstars, knockoff Nikes. Teakettles and vases and jewelry and rugs, so ornate, so painstakingly intricate, often rendered in deep blues or shades of green. Old cell phones and the attendant accessories, transported, ostensibly, from Times Square circa 2000. Butchered meat hanging in the sun and nakedly on counters, sometimes unidentifiable and vividly redder than what you see at home. The men with knives whose shirts are stained with dried blood; the chickens and geese loitering about, waiting their turn. Shifty cats, their lithe, emaciated bodies primed for survival on the streets; the occasional donkey crossing. A pervasive stench of ammonia and cigarette smoke and exhaust from motorbikes and, at prayer time, a baritone human moan, surfing below the clatter of the street. The irony of this sensory overload: everyone’s essentially selling the same shit. Spend an hour there and your curiosity quickly devolves into a resigned sort of sadness at the futile plight of these hunched-over shopkeepers, their faces drawn, hawking their wares with a desperation you want to warn them is ineffective.

Now, sure, there are touristy pockets of certain big US cities that suffer from the same problem. But unlike their American counterparts, Morocco’s artisans demonstrate a myopia that is, perhaps, borne out of a respect for tradition. These guys are really good at what they’re good at—tanning leather, say, or making super-fucking-beautiful bowls my mom would like. To an outsider, it seems as if they feel there’s no incentive to make anything different from what they’ve been making. Maybe there is no incentive. Probably they just like what they like. I don’t know, and I’m not in a position to say.

What I can say is that while a respect for one’s roots is an integral aspect of fashion (and, of course, one’s culture), the economic condition of most Moroccans and a—by Western standards—repressive and censorious culture doesn’t exactly facilitate a progressive or diverse sense of style. (One thing that surprised me about Dubai, and to a lesser extent about Rabat, were the outsized shopping malls designed for a people who, by and large, still religiously—pun intended—wear kaftans. Here was a place expressly designed to sell a bunch of clothes that a significant proportion of the population literally couldn’t wear.)

Living in Rabat and traveling through Morocco was an eye-opening experience. You’re really forced to confront the natural biases embedded in your subconscious as an American, and swim past them. I would whole-heartedly recommend visiting. That said, I found myself, after a few weeks, longing for the more ostentatious displays of American diversity—not just in terms of style, but in the ready availability of different foods and cultural experiences. This is not to disparage the former, but to celebrate the vibrant multiculturalism of the latter.

God knows it could use celebrating right now.

Trends
—Handmade leather slippers, which come in a variety of styles and, dressed up with a pair of joggers or slacks, would actually look pretty cool.

—Tracksuits and Nikes—wiry, nifty boy-men whose bodies, in their thinness, appear predisposed for navigating the narrow streets and rush hour of oncoming foot traffic.

Shouts
The camo-wearing motorcycle rider with a mini-ponytail; old, Bill Cunningham–esque men riding bicycles through Marrakech with oversize wool blazers and slacks; a young man walking along a road near a gorge in the middle of nowhere, it seems, en route to the Sahara, wearing an inordinately stylish blue-checkered button-down and tapered black jeans.