A Dine-In Theater Sets Up Shop in Downtown Brooklyn

Complete with a Gothic Bar Full of Medical Grotesqueries 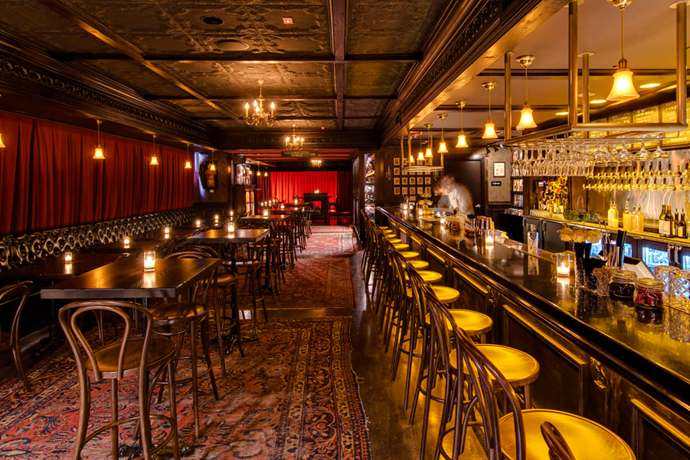 14 Photos Alamo Drafthouse
Your dinner-and-a-movie nights will never be the same.

Well, they can be, but why, when you have a dine-in theater serving up pancetta mac and cheese, with a Gothic-style bar boasting drinks inspired by a medical exhibition up front?

It’s called Alamo Drafthouse, and it’s a dine-in movie theater chain that hails from Austin (you may be familiar with one of its 20-ish other locations) and that’s about to open up shop in downtown Brooklyn this Friday. The lobby bar we speak of is called House of Wax, and it gets pretty fucking weird.

There’s a lot to take in, so let’s get right into it.

You’ll enter a lobby—note the carpet, which is an exact replica of the Overlook Hotel’s in Kubrick’s The Shining—then proceed into House of Wax.

What this is: A museum-bar of sorts. Most of its objects come from a popular exhibition in Berlin in the late 19th and early 20th century called Castan’s Panopticum—known for anatomical waxworks, death masks of murderers, monkey skeletons, that sort of thing. Oh, and they’ve got drinks—if you can stomach them.

When you’re all set and ready, head upstairs to the actual Alamo Drafthouse part.

What this is: A good old-fashioned movie theater—one that’ll bring you a mezcal-pomegranate-molasses drink or a rosé milkshake, should you desire one. They’ll be showing everything from new stuff to indies to documentaries, with special screenings on the regular and weekly themed nights (Terror Tuesdays being one). You’ll want to keep a single eye on their calendar.