The Winter Hotel Is Coming

This Hotel Forecast Puts Mexico (and Chicago) in Your Future 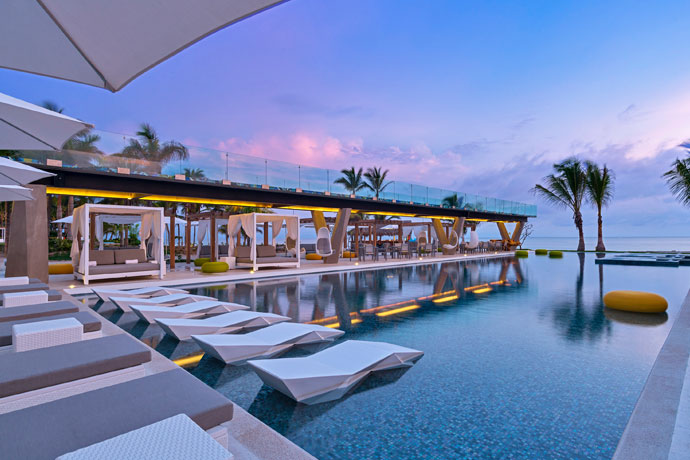 Hey, we’re just putting it out there. It’s not like frozen zombies are coming to eat you. It’s not that big of a deal.

It’s simply a season. You can embrace it. You can ignore it. Fortunately, two new hotels have recently opened that let you do either.

Chicago still has a few months of temperate weather left before things take a turn for the bitter cold. This place might make it more bearable when it does: Kimpton Gray, the latest Chicago offering from Kimpton Hotels, which officially opens today. (Please, take a look around.)

Once the New York Life Insurance Building, the 293-room hotel is now a cozy getaway in the Loop’s Financial District. Trimmed with its original and stately marble touches, it exudes an aura of sophisticated 1960s panache. You’ll find a South American restaurant on the 15th floor, Steadfast on the ground floor and Vol. 39, their sexy corner lounge, on the second. The rooms are warm and fully Frette’d, and thanks to a partnership with the Tie Bar, a local men’s accessory shop, offer you a mini-version of the shop in each room.

You’d hate to spend winter without a pocket square.

Embracing winter—particularly winter in Chicago—may be a tall order. This one will probably go down a little easier: Starwood Hotels has officially opened W Punta de Mita, an escape in Riviera Nayarit.

It features 119 villas, each with private balconies, and an aesthetic that clocks in somewhere between boho-beachy and a Mexican folk-art fair. (These will help demonstrate what that means.)

After a day at the beach or at the spa, spend your time near the pool at the laid-back Chevicheria. There you’ll drink beer and eat fresh ceviche from the back of a converted 1950s Chevy flatbed (it’s really nicer than that just made it sound).

Of course, you could have a full-on seven-course gastronomical adventure at Mesa1, situated on a private island in the middle of a lake. You reach it by walking on stepping stones that submerge once you’re seated. It’s like Gilligan’s Island but with private chefs.

No one will call you “Little Buddy.” Unless you want them to.

Travel
This New LAX Lounge Makes Flying Commercial Feel Like Flying Private
The Salon at PS LAX Has a Top-Notch Menu, a Garden and Chauffeur Service to Your Plane

Travel
Five New International Escapes You Need to See Immediately
They're Open Now, and They're Spectacular