“We All Get Dressed for Bill” 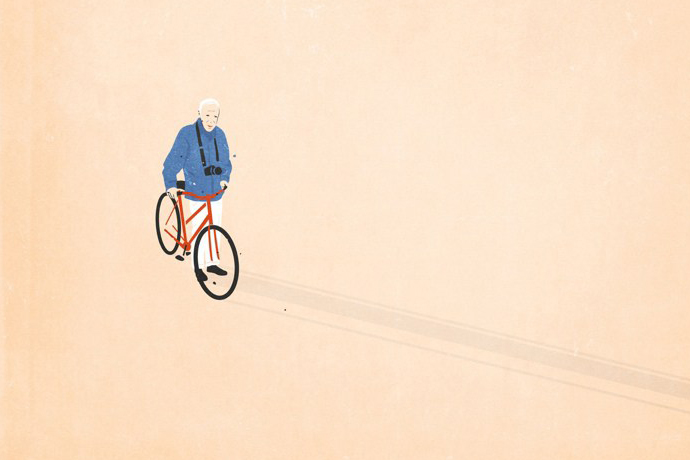 By now you know we’ve lost Bill Cunningham, and you can read excellent remembrances here, there and everywhere. But we’d be remiss if we didn’t chime in ourselves, because everyone who cares about style in any capacity owes the man a debt of gratitude. Here’s ours.

Living in New York, you inevitably see celebrities great and small. But seeing Bill had its own special excitement. I was about to write that it was like seeing a landmark, gliding around town on a Schwinn, complete with bell, when I realized that he was literally designated a living landmark by the city in 2009.

The first time I saw him was pedaling out of the south side of Central Park. I was sweaty and basic and his camera wasn’t out. All I cared about was that I saw the man in the blue coat. I immediately texted a half dozen people.

The next time was last summer, with the other half of the Kempt/Style & Beautiful Things team, Najib Benouar. We were walking from one NYFW:M show to a presentation a bit further uptown. We’re talking about whatever, when we see an older gent in that blue jacket. Is it? Holy hell, it is. Bill Cunningham is pointing a camera in our general direction. Does it matter that there are several other more daringly dressed men in our vicinity? No. That there is Bill Cunningham, and we are, at the very least, in his way. Thirsty, in every sense of the word, and possibly on one of his negatives.

We kept walking, buzzed on the remote possibility of being subjects in his photo column. When we arrived at the presentation, he’d beaten us there. By this time, we’d come back to earth. No, we probably wouldn’t make it, we agreed aloud. But maybe we would, we thought silently.

So there he was, not paying much attention to the fact that everyone in the long line outside was paying all their attention to him, trying to figure out how best to act, evaluating whether they’d dressed themselves for what he was looking for for that week’s On the Street. He just hunched and shot. Didn’t speak. Just walked down the line, hunching and shooting.

We remember these moments, and always will, because, speaking to the dedicated minority of you out there who take time out of your days to check out The Sartorialist, Tommy Ton or any of the scores of other street style sources out there (and their attendant menswear blogs), you have to think to yourself, just where would we be without Bill? It’s possible the wheels of this massive cultural shift to men caring about fashion never gets moving without his decades of inspiration.

There’s an entire economy of Instagrammers posting two-thirds shots of their torsos each day, implicitly telling you, “This is how I’m dressing today, please admire, and remember, imitation is the sincerest form of flattery.” There’s a use for this. It’s a learning tool for all of us. But there’s a vanity in that that’s completely, purposefully and sincerely missing in Cunningham’s work. His collections weren’t about style. They were about the stories of a city and its people and the passage of time, as told through the lens of style.

He became a brand despite himself. A consummate photojournalist who made every effort to keep himself out of his work, and staunchly refused to partake in any of the trappings of the parties and galas offered him as his status grew. Both of which are, to say the least, rare in today’s style coverage.

My personal favorite work of his was a collection of men attempting, mostly in vain, to leap over slush puddles in the soaked aftermath of a particularly picturesque 2014 blizzard. He made sure to note that, while the women he observed had all sensibly decided to wear boots or galoshes, men refused to give in. And so the collection is a series of awkward pirouettes and utter fails and wingtip destruction. It was cheeky, timely and telling, but still loving. Always loving. In this small set of photos you get the narrative of a city swooning over a beautiful snowfall, the collective hangover of the inconvenient days after, a subtle statement on the stubbornness and pride of men vs. the practicality of women and some good-hearted schadenfreude. And that’s without even addressing the fashion aspect. All of which is to say, Bill validated the cliché of a photo saying a thousand words.

Is Barcelona the World's Best City for Cocktails?

This Auction Features the World's Best Wines and VIP Experiences