This Is the New Watergate Hotel

Now It’s Got a Whiskey Bar, a Rooftop Lounge and Some Seriously Good Eats 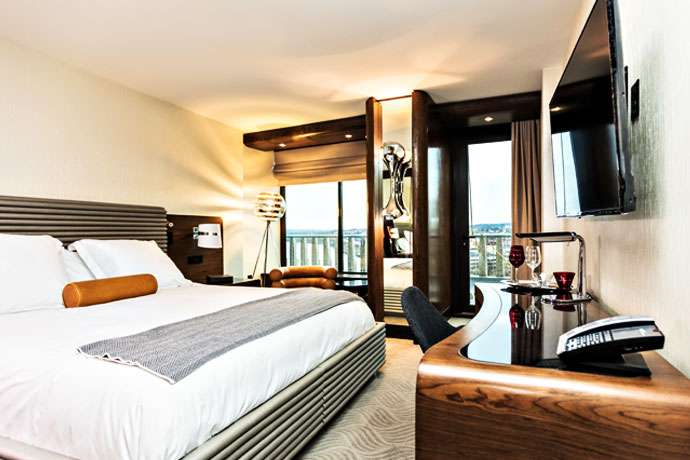 And soon... tasty Asian snacks by the rooftop fire pit.

Welcome to the newly renovated Watergate Hotel (yes, that Watergate Hotel), some eight years, a ’60s-inspired whiskey lounge and a significant chef later. They’re now booking for a May 2 opening.

This place looks different, sure. But the rooms’ dark, curved wood furniture, bold patterns and generally minimalist vibe are still a nod to Watergates past. (And they lie just beyond these clickable words.)

Your most vital talking points are as follows:

There’s a golden, glorious whiskey lounge in the lobby.
Saunter through the lobby and follow the copper walls to this softly glowing space. Note that it’s lined with 2,500 bottles of backlit whiskey, which feels promising. Note the Doors lyric stitched into the rug below, which makes a lot more sense when you know it lent itself to the lounge’s name: the Next Whisky Bar. Stop noting things and order some whiskey.

Tasting menus are happening at Kingbird, the massive restaurant spanning the length of the hotel.
It’s spearheaded by a veteran chef from England’s Michelin-starred Fat Duck and New York’s Andaz 5th Avenue, and it’s where you’ll assess the scallops with pork belly, crispy frog legs and roasted foie gras over cherry blossoms situation. Someone’s got to do it.

A solid rooftop is imminent.
Soon, you’ll be able to meet someone on the rooftop to point at the Washington Monument whilst enjoying Asian street food by the fire pit.

Having a drink by the bar also works.

Travel
Saba Rock Is Back, and It's Beautiful
After Being Destroyed in 2017, the Iconic Island Resort Has Reopened to Visitors