Oh, and Vegan Chicken and Waffles. That’s This... 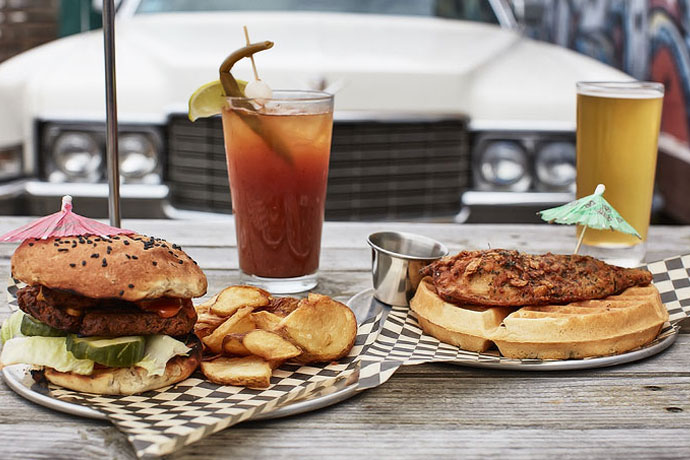 10 Photos Classic Cars West Beer Garden
This is a story about you, beer, a 1969 Jaguar XKE and vegan chicken and waffles.

A story that begins at the Classic Cars West Beer Garden. As you may have gathered, it basically involves a bunch of things you really like in one place, and it’s now open in Uptown Oakland. Here, have a look.

You’ll notice pretty quickly that the “classic cars” portion of this equation is very much present and accounted for. As in, there’s an actual showroom full of vintage cars. And all of those cars are, indeed, for sale. We’ll give you a minute.

They’ve got cars in the expansive outdoor beer garden, too. That’s where you’ll find yourself on warm weekday evenings and during Sunday brunches, drinking local beers from Linden Street and Ale Industries at a wooden picnic table surrounded by colorful murals.

Also there: comfort food from Hella Vegan Eats. In terms of tangible, edible things, what that means for you is anything from poutine topped with oyster mushrooms to cornflake-crusted fried “chicken” and waffles.

And we mentioned that you can procure a ’56 Austin-Healey there, right? No?

Huh. Probably should have.