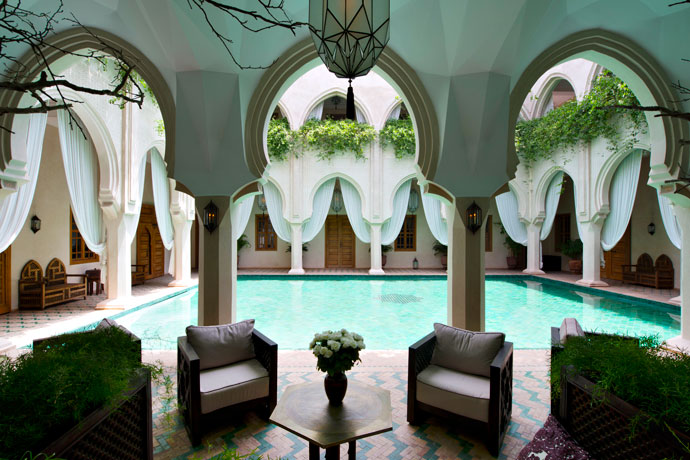 A whole generation of French poets. A 1987 Cure song called “How Beautiful You Are.” A Japanese comic that you’ve probably never heard of.

It’s a new hotel from a Belgian architect and designer who drew inspiration from the famous poem “Invitation to the Voyage.” It’s booking now in Marrakech’s oldest neighborhood.

When you walk through the huge wooden doors here, your soul will just automatically start searching itself. Maybe it’s the traditional Moroccan music throughout the building, or the fusion of Bedouin and Marrakech art everywhere, but it’s definitely that kind of place.

Feel free to get a little lost exploring the grounds. There’s the subterranean hammam. The rooftop terrace. The Pixel Room, where you can have mint tea and pastries while surrounded by 23,000 pixelated images of the city’s most famous square. Great job, whoever named that room.

But you’ll have the most trouble leaving the Library. It’s where the pages of 1,083 French-literature books have been folded to display a letter. Together, they spell out Baudelaire’s poem in its entirety.