Two Good Reasons to Go to Bed Early in NOLA

Well, Maybe Not Too Early. But Definitely to Go to Bed. 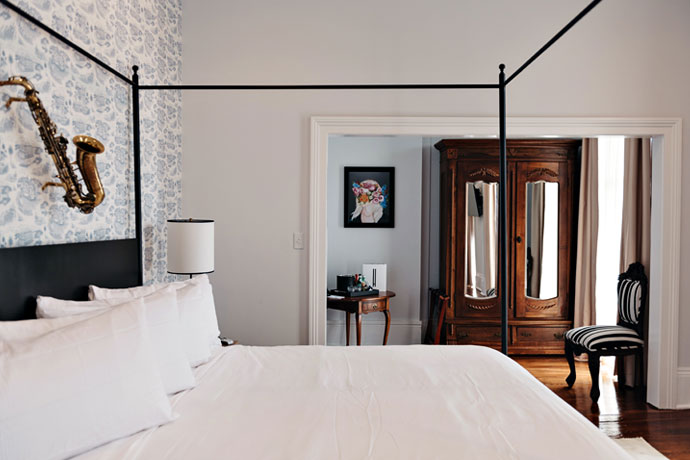 Yes, the Sazeracs. And yes, the bananas Foster at Commander’s Palace. And surely, the beignets.

But, oh. All those beads.

They really make going to New Orleans for Mardi Gras worth it.

Though say for some silly reason you need another justification to head down. Say you’re not even that interested in Mardi Gras. Or beads, for that matter. (Related: this.) You’re more into cool boutique hotels teeming with authentic civic history. Fine. On that front, we’ll give you a good reason. Two, in fact. We even have a slideshow if you need more evidence.

Henry Howard Hotel
This intimate, 18-room hotel opened this week in an 1867 townhome mansion, which now bears the name of its architect. With its mix of Greek Revival architecture and just slightly edgy contemporary photography, it’s a nice mix of old and new. It’s located in the Garden District, so you now have a romantic-getaway-for-two idea... although you can rent out the entire wing on the second floor, which sleeps up to six. Ours is not to judge how many people you romance at one time.

Ace Hotel New Orleans
Yes, it’s the people from Portland who basically perfected the art of hipster-based hospitality. Their 234-room foray opens March 14, giving it enough time to get fully situated before Jazz Fest in May. It’s located in the Warehouse District in a 1928 art-deco-style building (it was Barnett’s Furniture Store until the 1970s). The Ace Suite, a bi-level room with its own terrace, sounds like the way to go, if you’re the type who needs to have acoustic guitars and fully stocked bars at your disposal. But when it’s time for dinner, an Italian/Southern spot called Josephine Estelle from two Memphis-based chefs will be ready. Though when are you not ready for Italian/Southern cuisine?