The Best Little Movie House off the Morgan Stop 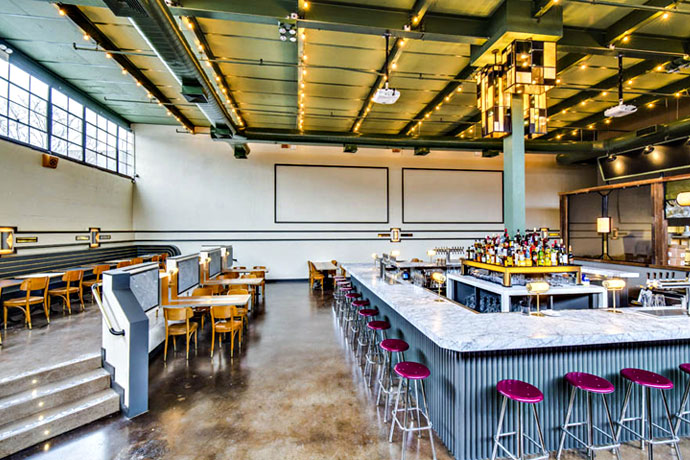 Because of Syndicated, the latest and greatest in the movie theater/restaurant/bar revolution, opening tomorrow in Bushwick.

This was all put together by a former location scout. Like so much of Bushwick, it’s in what used to be a warehouse. Think of it as the indie version of Nitehawk, but with its own separate restaurant. Now that you’re thinking of that, let’s take a look at what you’ll find in each space...

In the Theater
—60 seats.
—A mixture of independent films and classic ones. They’ll be showing the Oscar-nominated shorts during Valentine’s week, and Invasion of the Body Snatchers on Thursday.
—The Man Who Fell to Earth (a David Bowie movie) on Wednesday.
—Curry powder popcorn, along with seven other types, all “popped in-house.” Hilarious.
—Double features.

At the Restaurant
—70 seats and a huge marble island bar.
—Duck confit nachos.
—Cocktails from the man who does them at Piora, including Redrum, a drink of Jack Nicholson reference featuring Jamaican rum, añejo tequila and other things.
—Bacon-butter maple meatballs.

Those... are not healthy.