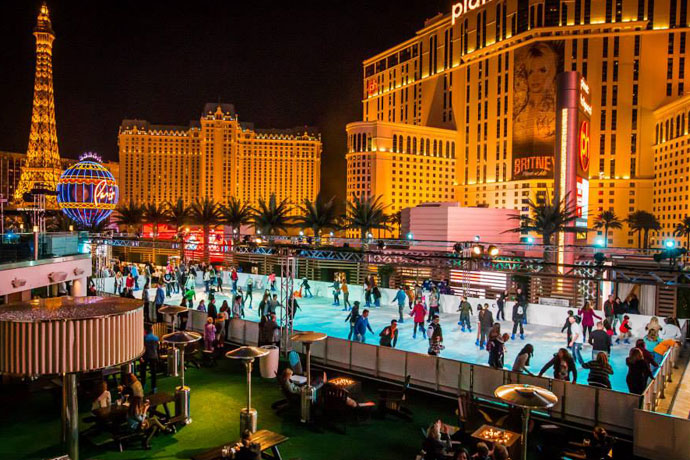 The Check-In: first-person romps through our favorite hotels.

Last year, I just spent the afternoon ice-skating, then relaxing by an outdoor fire, looking at the gently falling snow and warming myself with a rum-and-sherry hot toddy and toasted cashew-butter-and-roasted-strawberry-jam sandwiches.

It was a scene out of Norman Rockwell—only with more palm trees, fake snowstorms on the half hour and an ice rink that overlooks the Las Vegas Strip.

Welcome to Thanksgiving weekend at the Cosmopolitan. This is what traditional family holidays look like now, Rockwell. Sorry you missed it. It’s pretty wonderful.

I’ve been to Vegas many times during Thanksgiving and Christmas. Each time people ask what I’m doing for the holidays, and I say “Vegas,” the most frequent responses are a “Great. Getting away from your family?” or that perplexed cock of the head that seems to say “How sad. No family, huh?”

Neither assumption is correct.

My enterprising mom moved to Sin City in 1992, part of a great wave of graying, but still pre-retirement-age, blue-collar Midwesterners who found jobs and warm weather there.

My mom had driven a special-needs school bus in the Chicago suburbs for nearly 20 years (yes, you can call it the short bus). It was challenging and low-paid work, but apparently, Vegas needed a woman with her very particular set of skills. She quickly landed a job shuttling hotel guests—along with vagrants and the occasional celebrity—between the Barbary Coast and the Gold Coast.

She’s now retired, but to me Las Vegas is still more about family than gambling. And I think it’s a lovely place to spend Turkey Day.

Yes, non-American tourists mostly populate the check-in desk on Thanksgiving Day, and the usual kinetic energy of the city is dialed back a bit. Still, our room overlooked the Bellagio fountains, and champagne on the balcony is a nice accompaniment to the Macy’s Thanksgiving Day Parade. All that, and pole dancers on top of slot machines, too.

But my mom doesn’t get out much these days, even though she lives only about 15 minutes from the Strip. So when we come to town, we like to do it up. Take her places she generally hasn’t been, can’t afford and won’t be disappointed by. It’s that last one that always gets us.

We carefully considered STK at the Cosmopolitan, but after testing it the night before decided the stepped platform seating and loud music might be too much for a gal in her 70s. We considered its Wicked Spoon and its seemingly endless holiday selection, but the buffet would be tough for her to navigate.

We wanted her to be wowed with tradition and to shower her with opulence... or was it vice versa? Whatever. The important keywords here: tradition and opulence. We took her to the Four Seasons.

“Oh, not the Cosmopolitan?” she asked. Did I hear a note of disappointment?

I made the arrangements and we were escorted to our table at Charlie Palmer Steak, the Four Seasons’ signature restaurant. Opulent, but tasteful. Traditional, but not too traditional. Seemed perfect.

“So quiet,” my mother said. Loudly.

Dinner was every bit the multicourse feast you’d expect. Still, she seemed, if not disappointed, a little bored by it all. Then someone called her name.

Ed, as we came to learn, was the pit bull breeder who had moved into the house next door to her about a year before and about whom she had complained bitterly ever since. What were the chances? Even in Vegas it was hard to calculate.

“Ed, this is my son. He is staying at the Cosmopolitan,” she explained with a nod in my general direction. “But we came here instead.”

Ed left and some complimentary champagne and desserts arrived in his wake. “Oh, hey, if you write about this place,” my mom said, her mood brightened. “Be sure to put a good word in for Ed, would ya?”

Travel
You Can Stay at Kevin Costner's Mountain Ranch
The 160-Acre Colorado Property Has Three Houses, a Private Lake and Spectacular Views