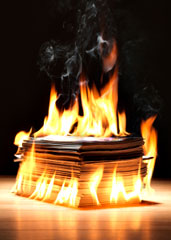 Ah, that ache of regret over an email that you wish you never sent...

Retract anything with Dmail: a new Chrome extension that allows you to destroy regrettable emails whenever the regret may hit, not just like five seconds later—it’s available in free beta now.

So the way it works is this: you’ll download the extension. Give it the necessary permissions. From then on, a new button will appear at the bottom of your emails, a reminder of life’s fleeting and generally impermanent nature.

Anyway, the next time you go to send an email, hit that button instead. It’ll encrypt the message so you’ll be able to take it back whenever. Yep, even if it’s three weeks from now. Yep, even if it’s been read. (Maybe you can convince the reader it never happened. Maybe.) So yep, it’s kind of like Gmail’s “unsend” option, only better.

—Your significant other and your mother have strikingly similar names.

—Your third martini pens a heartfelt message to your ex.

There are many other scenarios.

But those two seem the most pressing.

Gear
You Can Own the Car From "Knight Rider"
David Hasselhoff Is Auctioning Off K.I.T.T. From the Iconic 1980s TV Show

Gear
The New Fitness and Meditation App We All Need Right Now
Ultrahuman Wants to Help You Work Out, Relax and Sleep

Gear
A Spacious, Submersible Watercraft For You and Five Friends
Dude, You’re Getting A Personal Submarine

Gear
A New Collection of Hemingway-Inspired Fishing Gear
Channel the Legendary Author With These Rods, Reels and Even a Boat