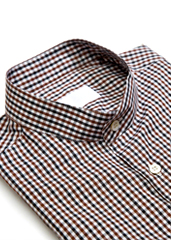 Also coming to an end: the suntanning. The paddleboarding. The gratuitous shirtlessness. Well, at the office, anyway.

So it’s time to get you set up with a new shirt guy.

Here’s a place to start: Blank Label, a showroom with lots of Italian fabric and just a little scotch, now open in River North.

If the name sounds familiar, it’s because they’ve been running an online custom-shirt company out of Boston for the past three years. Now, 30,000 shirts or so later, they bring their tailoring skills to a sparse-but-efficient loft space on Ohio Street.

You’ll take a seat in what looks like a hybrid between an Eames chair and a barber stool. Then, really open up to their haberdashers regarding your innermost feelings about medium-weight poplin and widespread collars.

If it takes a nice glass of single malt to do that, so be it. If you need something to put over your shirt—a two-button jacket, for example—that’s not a problem either. And then you’ll leave. Go home. Forget this ever happened.

A week later, you’ll come home to find a package at your door.

Style
Suede Bombers, Heroic Denim and Casual Things by Way of Venice Beach
Because Winter’s Got to End Sometime

Style
Reid It and Weep
Billy Reid Is Here. This Is His House.