Piranha for Dinner at the Big 4 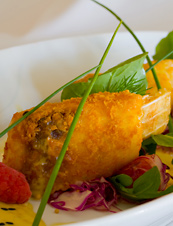 Eating out is an adventure.

Sure, you're not usually tackling Bourdain-esque culinary insanity, but you've never shied away from the crazier side of what's edible.

Which is why you'll be glad to know that we managed to sniff out a dish that would impress even Indiana Jones (and it's way better than monkey brains).

While you're familiar with the story of the tiny menacing predator that will happily strip your carcass to the bone, its flaky white meat is surprisingly sweet and delicate—much like a vicious version of a lake perch.

Taste-wise, you're in good hands, as chef Gloria just returned from Brazil sussing out various preparations before crafting her own. So when the piranha appears at your table, you'll see that the fish is cut in chops—much like a lamb lollipop—then coated in a house-secret potato dusting before being deep-fried, fish-stick style, and served with a spicy mustard sauce for some heat.

If you order it as part of the off-the-menu Walk on the Wild Side platter, you'll get to try other exotics like Scotch-Glazed Wild Boar and Rattlesnake-Rabbit Sausage.

Note: Lou Reed does not officially endorse this platter.