Saam at the Bazaar

Man Behind the Curtain

A New Hideaway at the City's Hottest Restaurant 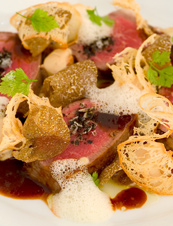 You knew there'd be a spectacle, and at the Bazaar by José Andrés, a spectacle was quickly born.

Four-star raves. Raucous surges at the valet. Monkeys on the LEDs. Jamon Iberico and liquid-nitrogen Caipirinhas well into the night…

And now it's time to forget all that. Or at least casually stroll past it as you approach the regal, restrained chef's tasting room hidden behind it all—it's called Saam, and it officially opens tomorrow.

A hushed hideaway that seats about 40 people max, Saam is tucked behind curtains to maintain your privacy. Once you find it (behind Bar Centro's bar, in the back), you'll take a seat in what feels like an intimate dinner party inside Philippe Starck's library—think cream-colored leather, Murano sconces and, yes, books.

It comes in at $170 per person ($120 without the wine pairings—as if that were an option), so this is the elegant special-occasion humdinger to pull from your arsenal to secure the promotion, the ring or that starlet's real phone number.

Or, you know, when it's Thursday.