A Flask That Could Go in the Smithsonian 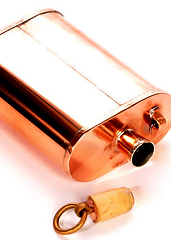 In short, you’re not very familiar with life in the 19th century. Well, it’s time to get familiar, dammit. Starting with a flask right out of the dusty trail and the Gold Rush.

Presenting The Great American Flask by J. Bromwell, a 200-year-old argument for the other, less dangerous kind of concealed carry. You used to have to wait eight weeks while they made you one to order, but you can now get them right away from the local folks behind the Mutiny online shop.

If Django and King Schultz carried flasks, they’d look something like this. In fact, they might have been exactly like this flask—this Tennessee factory has been turning them out since 1819, and they were particularly popular among westward pioneers (though we can’t vouch for their bullet-resistant properties).

Anyway, they’re 100% copper, hand-soldered and hot-tinned like in the old days, and topped off with a solid birch stopper. You’ll want to let it get a nice, natural patina. You’ll also want to fill it with nine ounces of whatever Old Tom gin, white whiskey or sturdy mezcal you like.

If you’re a sarsaparilla person, well, that’s fine, too.