Cigars Made with Bourbon and Gold 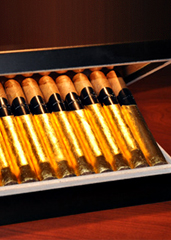 We’re about to make you say, “That’s kind of ridiculous, but why the hell not.”

Go up in smoke for London Cut Cigars, a new web-based stickery with enough common sense and common decency to put brown liquor and precious metals in your cigars, online now.

Your course of action should be as follows: 1) Get some of these cigars. 2) Smoke them.

Yep, that’s pretty much the play here. Just hit the site and figure out what works best for you—there’s the Madras (that’s their house blend), the Bourbon-Aged (that’s the one that has a bourbon-infused wrapper and was aged in a bourbon barrel) and the Black Tie (that’s the one made out of 24-karat gold... for some reason).

The guys who roll these things got their inspiration from the tailors of Savile Row. Which means they obsess over every seam and stitch. Which means... a better cigar, we presume.

Oh, and before you ask... yes, the gold ones taste like gold.

Gear
A Gorgeous Racing Simulator for Your Home
It's Like Driving a Real Race Car, Minus the Car

Gear
This Ridiculous, Totally Necessary Bedside Lamp Dispenses Water With the Push of a Button
All So You Don’t Have to Get Up in The Middle of the Night