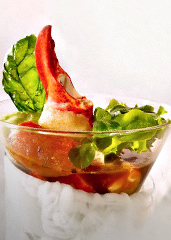 Here, to clarify, we’ll use it in a sentence.

On February 9, you’ll be knocking back lobster shooters in a Trinity Groves brewery.

Great, now we’re all on the same page.

This is your first look at in-the-works Latin-Asian restaurant, Chino. Its official brick-and-mortar locale is coming to Trinity Groves in a few months, so you could just wait for it to open. But... nah. See, they’re doing a one-night preview at their neighbor’s place. And that neighbor, well, they make beer for a living...

To take part, just consult your calendar, cancel any existing plans for February 9 and reserve a spot. When the time comes, step inside the massive blue brewery, have a couple of those lobster shooter appetizers, a pint of Local Buzz, and make a little conversation over by that silver mash tun. You know, typical dinner-in-a-brewery stuff.

Then, find your seat. On the table: double-fried quail eggs with tamarind reduction, braised pork belly enchiladas and whatever else your chef (Uno Immanivong of ABC’s The Taste) feels like dishing out.

Here’s hoping she’s not in the mood for wheatgrass.