A Top-Secret Speakeasy on Capitol Hill 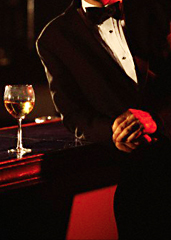 Capitol Hill has a new secret. No, it has nothing to do with the fiscal cliff.

It’s just about booze—less critical, and yet somehow more interesting.

It’s called Harold Black, it opened last night, and here are the five things you need to know.

1. Prohibition has ended—but they might not know it. There’s no sign on the door, save the one for Suna, the owners’ new tasting-menu restaurant. A list of rules prohibits cell phone use and flash photos.

2. You need a reservation—unless you don’t. The place’s 26 seats (four tables and a bar) must be booked by calling ahead. No, they don’t publish the number. But word to the wise: if you just happen by and seats aren’t full, they won’t exactly turn you away.

3. Like a 1920s speakeasy, it resembles someone’s living room. So you and your date can expect funny angles, intimate little nooks, a few French-industrial fixtures and plenty of books.

4. There’s a drink called the Deal-Breaker. It’s got stout, aged rum and vanilla. But if you’re in the midst of budget talks, you might opt for one of the eight other cocktails or eight beers.

5. They have food. The chef from Suna is turning out bar snacks like chips with a cheese dip made with Belgian beer, and puffed pork skins.

Hopefully no one prohibits those.